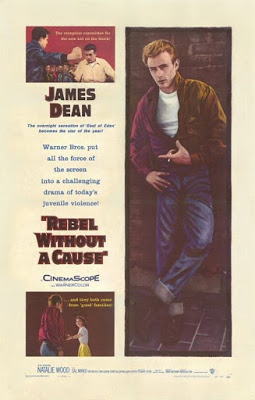 This month I delve into the film that immortalized James Dean. Jim Stark (Dean) is a rebellious and angst-ridden teen, whose family just moved into town. Jim befriends fellow outsider John ‘Plato’ Crawford (Sal Mineo) and feels an attraction to local girl Judy (Natalie Wood). However, Jim is targeted by a local gang, whose leader Buzz (Corey Allen) challenges Jim to a “Chickie Run” in the middle of the night. However, it isn’t long before things take a tragic turn.

Actor James Dean’s career was cut tragically short when he was killed in an automobile accident just a month or so before the release of 1955’s Rebel Without a Cause. His film career was just getting started with East of Eden the same year, which resulted the first of two posthumous Best Actor Oscar Nominations, with the second being for Dean’s final role in 1956’s Giant.

In this way, it can be said that James Dean was already immortalized by the time Rebel Without a Cause hit theatres. With his outfit of blue jeans, t-shirt, and red jacket, Jame Dean’s character of Jim Stark would be an icon of rebellious teen angst for many generations to come, with nobody every viewing him as anything other than the 24 year old, who died way too young.

Rebel Without a Cause is a film that takes place over a 24 hour period, with the film starting with an intoxicated Jim being taken into a police station in the middle of the night. It is during this opening sequence of the film, where Jim utters to his parents the iconic line of frustrations “You’re Tearing Me Apart!,” which is probably never better known for having been recited by Tommy Wiseau in The Room.

Rebel Without a Cause is very much a film of its time and I do have to admit that it has hard to connect to the story in modern times. The story of the film is almost over-the-top melodrama, with Jim taking his angst to 11 and being constantly frustrated with his supposedly clueless parents. Another major sign of the time period Rebel Without a Cause was produced in was how there are practically no non-white people in the film, save for Jim’s Hispanic friend Plato and his black housekeeper. At least the film was progressive enough to portray Plato as likely having a homosexual attraction to Jim, without ever explicitly saying it.

My overall impression of Rebel Without A Cause is that it is a somewhat average teen gang drama that was elevated by James Dean’s tragic death. In fact, I have to admit that this type of story was done much better in West Side Story just six years later.