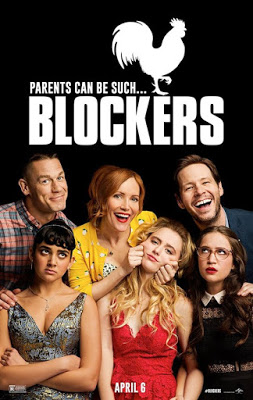 Three parents try to disrupt their daughters’ pact to lose their virginity on prom night in Blockers. Lisa (Leslie Mann), Mitchell (John Cena), and Hunter (Ike Barinholtz) are three friends, whose daughters Julie (Kathryn Newton), Kayla (Geraldine Viswanathan), and Sam (Gideon Adlon) are heading off to their senior prom. However, Julie leaves her laptop open and the three parents have discovered that the three friends have pledged to lost their virginity that night. This lead to Lisa, Mitchell, and Hunter racing off to stop this from happening.

Helicopter parenting is taken to extreme in Blockers, a new sex comedy produced by Seth Rogen and Evan Goldberg and directed by first-time filmmaker Kay Cannon. Each of the three central protagonist have their own relationship with their daughters. Lisa is a single mother who has grown a strong bond with her daughter Julie and is dreading her departure to college, while Mitchell is a literal life coach to his daughter Kayla. The black sheep of the group is the divorced Hunter, who wants to get closer to his daughter Sam.

For the most part, Blockers can be described as a slight rehash of the plot of American Pie, with the added Old School element of these three middle-aged parents infiltrating the world of teens to stop their daughters from having sex. Blockers is arguably Leslie Mann’s first leading role since This is 40 in 2014, with her character of Lisa being probably the most level-headed of the three protagonists, while also probably being the most reactionary to the discovery that her daughter made a sex pact. Then there is John Cena, who is is continuing his progression from wrestling to acting with a role that allows him to show some of his physical comedy chops, including a “reverse” beer chugging contest and a game of Marco Polo that can’t be unseen.

Among all the hilarity in the film, Blockers asks the question about whether it is appropriate for parents to stop their kids from being sexual. This adds a slightly bit more of a feminist slant to what is otherwise a typical sex comedy, filled with multiple gross out gags. While most of the focus of Blockers is placed on the parents, each of the daughters have their own storyarchs throughout the film, which each get their own individual resolutions.

While I can probably concede that the plot isn’t the most original in the world, I cannot deny that Blockers was a quite funny film to watch. If anything, this film is a fun way to spend an afternoon.