A non-binary Swedish teen grows through their relationships and gender identity in Always Amber. Amber is a 17-year-old, who had a very close relationship with their best friend Sebastian, who helped Amber discover their a non-binary gender. However, Amber has a falling out with Sebastian following a love triangle and they are left alone to grow as Amber begins considering going for gender reassignment treatment.

Always Amber is an observational documentary, where filmmakers Hannah Reinikainen and Lia Hietala follow the titular Amber from 2016 to 2019. The documentary is framed by a conversation Amber is having with a psychiatrist, as they detail their decision to go through with a mastectomy, as Amber feels discomfort at being sexualized as female. During the course of the film, Amber struggles with their falling out with their best friend Sebastian while growing and becoming more comfortable with their gender identity.

Always Amber is a documentary that provides a look into life of someone who identifies as non-binary. Always Amber has a very home movie feel to it, which is partially due to the fact that it features much actual home movie footage of Amber as a child, as they talking about their father, who had died of cancer. As a heterosexual cis male, I admit that I was a bit out of my element watching Always Amber, to the point that I had to keep note of everyone’s pronouns. However, at the very least I can say that watching this documentary was an educational experience. 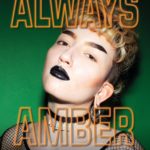