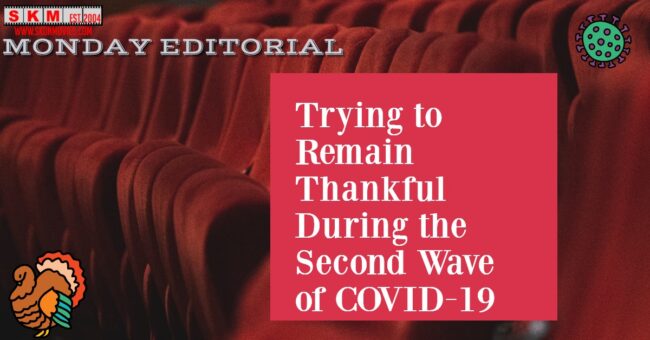 Today is supposed to be Canadian Thanksgiving, but we are also at the start of the so-called “Second Wave” of the COVID-19 pandemic, which will dampen many plans for families to get together, including my own, with me just having a much less extravagant dinner with my parents tonight. This is being called a Second Wave, but in reality COVID-19 never really went away and the government decided to reopen too much, too fast.

With this moving a movie site, I am going to focus this editorial on the decision by the Ontario Government last Friday to once again order that all cinemas be shut down for at least 28 days, as a response to daily COVID-19 infections surpassing 900. Part of me understands why cinemas were shut down again, while another part of me believes that they are being used as a scapegoat for the true causes of increased infection rate, such as reopened schools, which the government is much more reluctant to shut down and admit they were wrong in the first place about reopening them in September.

Moving back to cinemas, Cineplex quickly released a statement by CEO Ellis Jacob stating his belief cinemas have not contributed to the COVID-19 release. As someone who, despite initial apprehension, returned to seeing films in cinemas when they reopened in Toronto in August and was satisfied enough with the COVID safety measures, which included mandatory mask-wearing and limiting screens to a maximum of 50 people, that I felt comfortable continuing to go. I know that people like citing a scene from 1995’s Outbreak to demonstrate how unsafe cinemas are during a pandemic, but I believe in this case Cineplex was taking the right precautions.

Also, this second shutdown is coming at the worst time, since Cineplex like all exhibition chains is really struggling to survive financially during the pandemic. This past weekend, after the Ontario government ordered cinemas to shutdown there was a business column in the Toronto Star, which revealed the truly dire straits Cineplex finds themselves in, especially now that the majority of the major blockbusters have moved their release dates to 2021 or later. This year also saw Premium VOD become a viable alternative for studios and it is probably safe to say that the COVID-19 pandemic has forever changed the film exhibition landscape?

So, what do I have to be thankful for this Thanksgiving? Well, I’m thankful that I have yet to become infected with COVID-19, even though I’m now leaving home more frequently to work my day job as location support on film sets. I suppose then I’m also thankful that the government hasn’t (yet) decided to re-shutdown film productions, so I can earn an income that helps to pay my bills and keep this site running (even though joining my Patreon can also accomplish that). Ultimately, I’m thankful that there are still movies in some form, so I still have something to write about, even during these uncertain times.