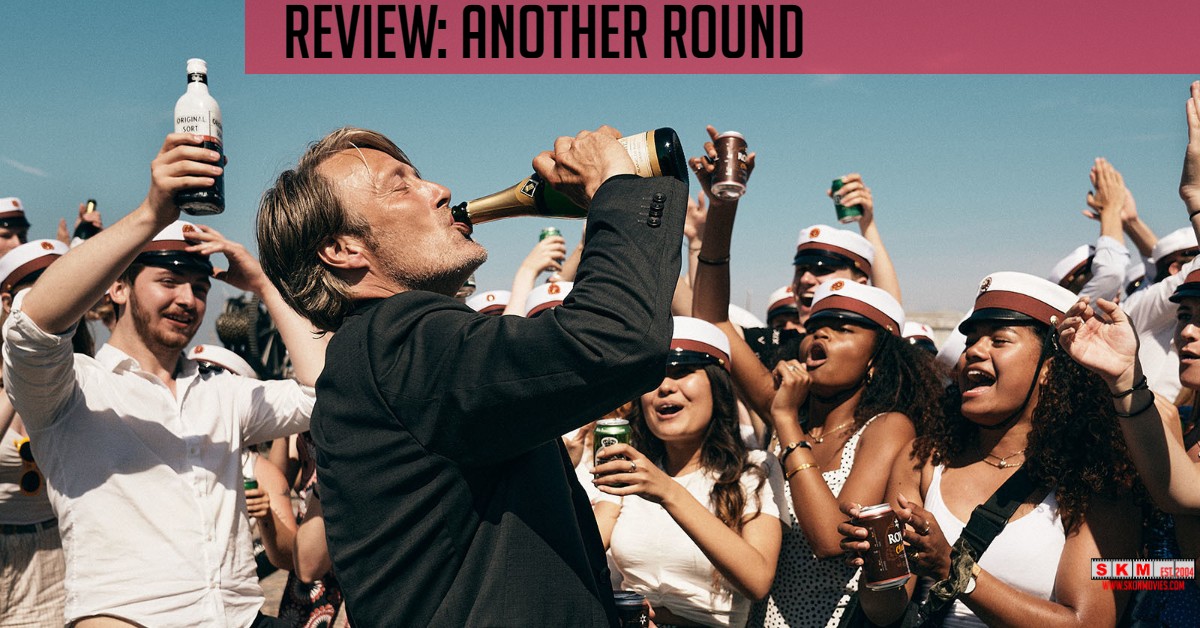 A group of friends perform an experiment about how consuming alcohol can be beneficial to their lives in Another Round. Martin (Mads Mikkelsen), Tommy (Thomas Bo Larsen), Peter (Lars Ranthe), and Nikolaj (Magnus Millang) are four teacher friends from Copenhagen. While out to dinner to celebrate Nikolaj’s 40th birthday, the group begins discussing the theories of psychiatrist Finn Skårderud, who stated that maintaining a blood alcohol content of 0.050 makes you more creative and relaxed. Martin, whose teaching career has hit a slump due to growing problems in his marriage to his wife Trine (Maria Bonnevie), decides to experiment with drinking during the day and is soon joined by the other three. However, as they steadily increase their consumption of alcohol, the initial benefits are soon overtaken by a variety of problems.

Another Round is a film that sees director and co-writer Thomas Vinterberg reunite with star Mads Mikkelsen eight years after their Oscar-nominated collaboration in 2012’s The Hunt. In Another Round, Mikkelsen plays history teacher Martin, who has hit a major slump in both his professional and personal life. A possible solution for Martin’s funk comes when his friend Nikolaj brings up a theory that maintaining a BAC of 0.050 can actually be beneficial. When Martin and his friend try this out, they find that there is an improvement, with Martin even being able to reconnect with his wife Trine. However, the friends progressively increase their consumption of alcohol, which results in more negative effects to take the forefront.

In contrast to the very heavy subject matter of The Hunt, Another Round is a decidedly much lighter reunion between Thomas Vinterberg and Mads Mikkelsen. However, there is still a bit of a dark undercurrent to the film, as the line between beneficial drinking and full-on alcoholism is shown to be a thin one. There turns out to be a huge difference between drinking a glass or two of win and consuming as much alcohol as your body can handle.

I went into Another Round expecting the film to feature more drunken debauchery, though the film sticks to more subtle effects, such as the slurring of words or walking into walls. In fact, the film reserves visible signs of intoxication as being a warning to these four friends that perhaps this experiment in one that is going too far.

Ultimately, Another Round is a film that both praises the benefits of drinking alcohol in moderation, while also acting as a cautionary tale about how easy it is to lose control, particularly through the film’s final scene, which is bittersweet at best.

Another Round is now available on VOD platforms