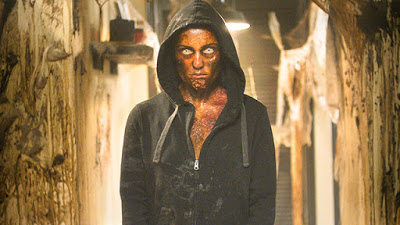 A young women undergoes a horrifying transformation in the body horror film Bite.  Shortly before her wedding to her fiance Jared (Jordan Gray), Casey (Elma Begovic) goes on a bachelorette holiday to Costa Rica with her friends Jill (Annette Wozniak) and Kirsten (Denise Yuen).  While swimming in an off-path spring, Casey gets bitten by something under the water.  After returning home, Casey begins to worry about whether she is ready for her upcoming wedding.  At the same time, her bite becomes infected and she undergoes some increasingly grotesque changes.

Directed by Chad Archibald (The Drownsman), Bite is a body horror film that is obviously trying to be a homage to David Cronenberg’s The Fly.  At the same time, the film is being used as a visual metaphor of Casey’s uncertainty about her upcoming nuptials.  Even though the film initially appears to be a found-footage film, it quickly switches to a more conventional format after the opening title.  Bite is practically a single-location story, with the bulk of the plot taking place in and around Casey’s apartment.

In addition to some pretty impressive and grotesque prosthetic make-up, Elma Begovic illustrates Casey’s transformation through the development of various insect-like ticks, the effect of which is quite effective.  Ironically, even though Casey turns quite monstrous and violent, she remains the most sympathetic character in the film.  The other characters are either cartoonishly wicked (i.e. Jared’s “old fashioned” mother), have hidden agendas, or lose the audience’s favour with dumb decisions.  However, that is not really a major fault of Bite, which still ends up being a pretty effective piece of body horror.