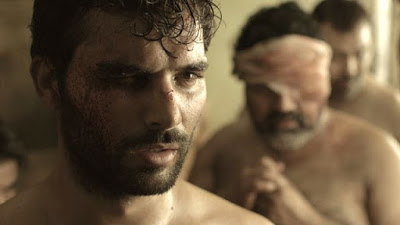 Kidnapped immigrants struggle for survival in Kidnap Capital. In, Phoenix, Arizona the Mexican cartel kidnap those wanting to get into the U.S. and hold them for random in thousands of drop houses. Manolo (Johnathan Sousa) and his pregnant wife Elena (Michelle Arvizu) are two such kidnappees, who are being help by Wyler (Paulino Nunes), who is demanding payment of $2800 for their release. Manolo and the other detainees must learn to work together if they ever expect to survive this ordeal.

Kidnap Capital is a dark and gritty crime thriller, based on the very real issue of kidnapped immigrants in Phoenix. The entire film takes place in the drop house, where Manolo and his wife are being held captive. While appearing tough towards his prisoners, Wyler has his own problems, as he owes an immense amount of money to his boss and has a strained relationship with his wife Kay (Lara Gilchrist). Soon enough, things reach a boiling point in this Arizona suburb.

Through Kidnap Capital, first time filmmaker Felipe Rodriguez delves into the little-known world of these Arizona-based kidnapping rings. Titles at the start state that the events of the film are inspired by true events and apparently the reality of these kidnapping doesn’t differ much from what is shown in Kidnap Capital. Altogether, Kidnap Capital is tense film with quite solid performances from its ensemble cast.