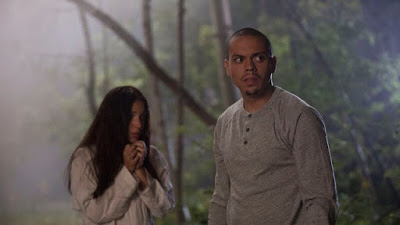 A group of young people are tormented by dreams involving urban legends on a supposedly haunted road in Buckout Road. Aaron Powell (Evan Ross) returns home from military service to stay with his estranged grandfather Lawrence (Danny Glover), who as the town psychiatrist is interested in the connection between the suicide of humanities teacher Stephanie Hancock (Mayko Nguyen) and the dreams of local youths Cleo Harris (Dominique Provost-Chalkley) and twins Derek (Jim Watson) and Erik (Kyle Mac). Aaron becomes interested the three’s experiences when he to begins having dreams related to the local urban legends of Buckout Road.

Buckout Road is a supernatural horror film that deals with urban legends and the possible truth behind them. In the case of the titular road, the includes stories of a woman murdered by her husband, killer albino twins, and a trio of witches burned at the stake. As he investigates the stories with Cleo and her friends, Aaron begins to suspect that there may be more to these urban legends than meets the eye. However, Aaron finds his investigation obstructed by Cleo’s detective father Roy (Henry Czerny), who doesn’t trust Aaron based on his sketchy past.

Probably the most notable thing that I can say about Buckout Road is that it is a very glossy supernatural horror film, with stunt-casted appearances by recognizable faces such as Danny Glover, Henry Czerny (Mission: Impossible), and Colm Feore (Bon Cop, Bad Cop), the latter who is only in the film to provide exposition. I suppose the plot of Buckout Road is fine, but I frankly didn’t care too much for a supernatural horror film that uses every cliche in the book.