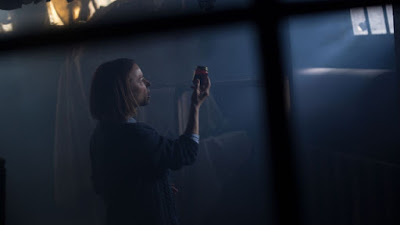 A woman uncovers the sinister past of the inn she is staying at with her husband in The Child Remains. Recovering from PTSD, crime scene reporter Rae (Suzanne Clément) has arrived at the Mercey Inn to celebrate her 42nd birthday with her aspiring musician husband Liam (Allan Hawco). The couple are greeted by the kind owner Monica Leeds (Shelley Thompson), who immediately correctly guesses that Rae is three months pregnant. However, Rae begins to have violent visions and sees an apparition of a woman at night. This leads Rae to investigate the inn’s past as a home for unwed mothers and the horrible acts committed by Monica’s mother Rose.

The Child Remains is a supernatural thriller a woman with mental health issues, who regains her investigative instincts as she begins to uncover the dark past of the Mercey Inn. The film stars Montreal actress Suzanne Clément, who is best known for her collaborations with director Xavier Dolan. Suffering from PTSD as a result of her work as a crime reporter, Rae hopes that the trip to Mercey Inn will be a quiet weekend with her husband Bill. However, as the weekend progresses, Rae becomes more obsessed with the inn’s history, while Bill becomes more distant and confrontational. In addition, Mrs. Leeds might know more about the inn’s history than she lets on.

For about two thirds of the film, The Child Remains is a semi-decent mix of supernatural thriller and marital drama. However, by the time the film reaches the third act, things begin to unravel, as the film features way too many twists and revelations that are needed. Without spoiling too much, I will say that the most bothersome twist involved the use of CGI in a way that came off more cheesy than scary. If it wasn’t for that, I would give The Child Remains a higher rating.