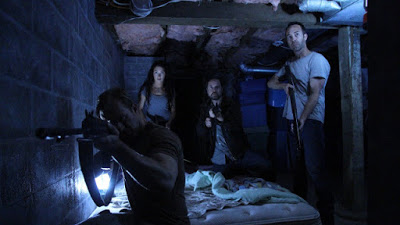 A group of survivors try to seek shelter during a vampire apocalypse in Red Spring. The world has been overrun by vampires and only a small percentage of the human population remains. A group of survivors that include Ray (Jeff Sinasac), Carlos (Jonathan Robbins), Eric (Adam Cronheim), Bailey (Lindsey Middleton), and Mitchell (Reece Presley) are trying up north to try and take shelter in a colder climate. After picking additional survivor Vicky (Elysia White), the group changes course and goes to Vicky’s family house, which features a bomb shelter to lay low in for a couple weeks. However, when a group of vampires tracks them down, it leads to a standoff at the property.

Red Spring is a vampire apocalypse film and the directorial debut for writer/actor Jeff Sinasac. The film follows a group of survivors as they try to seek shelter from the constant vampire threat. After picking up Vicky, the group decides to join her in her family’s bomb shelter. However, with the lingering vampire threat and one member of the group injured, the question remains how long these survivors can stay hidden?

Red Spring is a film that will likely remind viewers of either The Walking Dead or Stake Land. The film’s low budget is quite evident at times and with the exception of the Nosferatu-like lead vampire (Andre Guantanamo), most of the vampires border on cheesy with their grey make-up and dark circles around their eyes. However, despite the film’s limitations, Red Spring still ends up being a solid post-apocalyptic thriller.