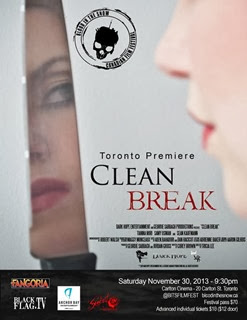 Cam Dawson (Samy Osman) is a lazy womanizer of a man, who lives in a house with his two roommates Scott (Sean Kaufmann) and Dan (Serge Plourde).  While at an office party, the shy and directionless Scott meets Tracy (Tianna Nori), a seemingly nice woman, who helps Scott to pull his life together.  However, Tracy also does not at all get along with Cam, who doesn’t like how she is inserting herself into their lives and becoming increasingly controlling of Scott’s actions.  It turns out that Tracy is a murderess, who does not take kindly to those, who disrupt her plans for a happy life.  As Cam gets closer to discovering Tracy’s true nature, he learns that his womanizing lifestyle makes him a target for her wrath. Clean Break lets the cat out of the bag, about Tracy’s murderous tendencies, in the very first scene of the film, so it’s pretty much a waiting game to see when she is going to kill again.  While the film probably would have been better if we didn’t know right away that Tracy was a killer, it lead to a humorous sight gag early on, which has Tracy casually holding a knife in the kitchen.  Even though Tracy is very much the villain of the film, she is still a quite likeable and sympathetic character.  The “clean break” of the title comes from Tracy’s motivation, in how she would rather kill people who break her heart, than see them with someone else.  Of course all this sympathy is erased with her vendetta against Cam, who she sees as despicable in the way he is always having one night stands. I am inclined to call Clean Break more of a dark comedy than a horror film, even though things get a bit more sadistic in the climax of the film. The film probably wouldn’t have worked so well if it wasn’t for the performance of Tianna Nori and her ability to switch between the perky and sinister sides of Tracy’s personality.  Like I said, it’s sometimes quite difficult to hate this character and the viewer is drawn in by Tracy’s bubbly personality.  If it wasn’t for her habit of killing people, she would most definitely be the perfect match for any guy. Overall, I have to say that Clean Break was a solid and enjoyable film, which uses its tale of a sociopathic woman to give relationship metaphors.  When it is all said and done, Tracy is not really an evil person – she just wants men to respect the women they are with and not just toss them away when the morning comes.8 | LIKED IT