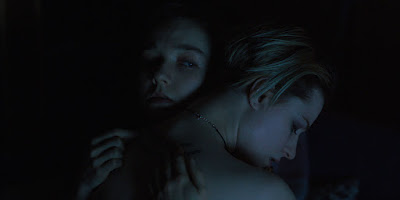 An emotionally unstable woman develops an unlikely connection in Allure. Laura Drake (Evan Rachel Wood) is a woman who struggles to find a connection in her life. Working as a house cleaner for her father William (Denis O’Hare), Laura begins working at the house of Nancy (Maxim Roy) and becomes infatuated with Nancy’s 16 year old daughter Eva (Julia Sarah Stone). Eva, who is disillusioned by the way her mother treats her, ends up moving in with Laura. However, Laura is revealed to be a very emotionally unstable person, who won’t let Eva leave out of fear of the consequences. Over time, the two end up a complex relationship that borders on love and hate.

The feature film debut of directors Carlos and Jason Sanchez, Allure is a drama about a woman who becomes obsessed with a teenage girl she believes to be her soulmate. Laura’s emotional instability is quite apparent from the start of the film as a one night stand goes horribly wrong. Laura becomes quite obsessed with Eva to the point where she practically kidnaps the girl. This results in a constant questioning of how true the connection that develops between the two is.

Allure has the challenge of developing sympathy for a character, who is ultimately not a very good person. Throughout the film, Laura is shown to be obsessive, controlling, and even violent. On the flipside, Eva possibly is showing signs of Stockholm Syndrome, as she is initially held against her will, yet begins to deeply care for Laura. Allure can be a challenging film to watch at time, particularly a sudden sexual assault scene, however it is still a compelling look into the mind of a troubled woman.