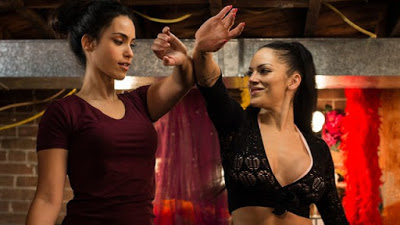 A young mixed raced girl is introduced to the world of burlesque in Becoming Burlesque. Fatima Jackson-Aziz (Shiva Negar) is a young woman of Syrian and British decent, who is under pressure to please the Muslim side of her family, particularly her uncle Yousef (Sam Kalilieh). Fatima chances upon a burlesque club and is pulled in by how the dancers express themselves on stage. This results in Fatima getting a job at the club and risking shaming her family to explore who she really is.

With her debut feature film Becoming Burlesque, writer/director Jackie English contrasts the patriarchal beliefs present within the Muslim faith with the freedom of expression that comes with burlesque. The film repeatedly makes sure emphasize the differences between burlesque and typical strip club, with the main description being that burlesque dancers “impose fantasies on the crowd.” Of course, Fatima’s exploration of burlesque comes into conflict with her faith and it becomes increasingly difficult to keep it a secret from her family, especially after her brother Mahmood (Khalid Klein) finds her at the club.

I’m probably going to start off by saying that as a white male, I am probably not the type of audience that Becoming Burlesque is trying to aim towards. While ultimately I say that the film is trying to give a very female positive message, it is probably going to the absolute extremes that Fatima would turn to burlesque as an escape from the patriarchy of the Muslim faith. Featuring performances by a real Toronto burlesque troupe, Becoming Burlesque will probably be enjoyed by fans of that form of strip tease. As for me, I left the film with mixed feelings.