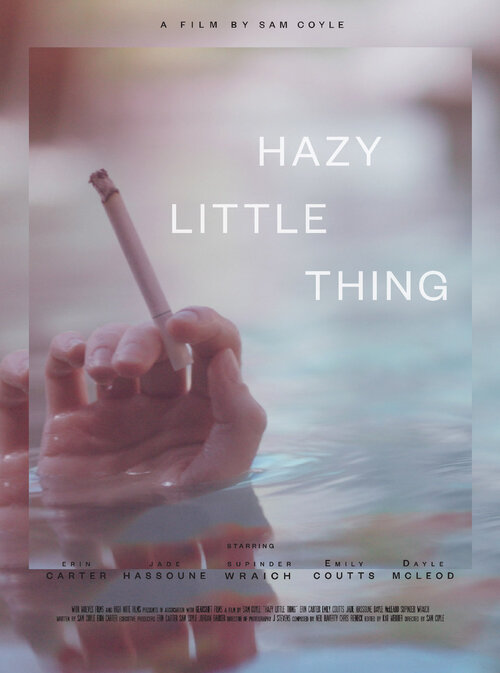 Friends of a writer suffering from depression stage an intervention in the form of a surprise birthday gathering in Hazy Little Thing. Billie (Erin Margurite Carter) is the author of a semi-autobiographical novel, who has been suffering from writer’s block and depression alone at her large house. After making a troublesome social media post suggesting a desire to commit suicide, Billie finds herself visited by her sister Karen (Emily Coutts) and friends Patrick (Jade Hassouné), Priya (Supinder Wraich), and River (Dayle McLeod) for an impromptu celebration for Billie’s birthday. However, it isn’t too long until the true reason for their arrival comes to the forefront.

Hazy Little Thing is the feature film debut for director and co-writer Sam Coyle, which deals with a writer suffering from depression, who suddenly finds herself visited by her friends and sister a birthday party/intervention. We learn that Billie wrote her novel as an attempt to connect with her absent father, despite Karen’s attempts to convince her that he is never coming back. It isn’t long before tempers begin to flare, and psychedelic drugs get ingested, resulting in everyone’s true feeling to come to the surface.

While watching Hazy Little Thing, I found myself conflicted at the contrast between the film’s serious subject matter about depression and overall presentation of the film, which includes many pop song set sequences, including the drunken selfie-taking by Billie that results in the concerning post that sets the plot in motion. By the time Hazy Little Thing settles into an extended drug trip sequence in the third act, I found myself wishing that director Sam Coyle and co-writer and star Erin Margurite Carter went in a different direction with this story.