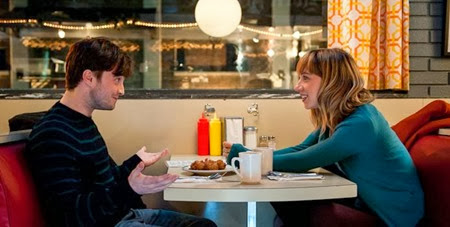 Toronto is the backdrop for this romantic comedy from director Michael Dowse (Goon).  Med school dropout Wallace (Daniel Radcliffe) hasn’t been in a relationship since he broke up with his cheating ex-girlfriend (Sarah Gadon).  At a party, Wallace meets Chantry (Zoe Kazan), the cousin of his friend Allan (Adam Driver).  Wallace is instantly attracted to her, but hits a snag when he finds out she is already in a relationship with a man named Ben (Rafe Spall).  Wallace instead tries to maintain a plutonic friendship with Chantry, which becomes increasingly difficult as his feelings for her grow. I have to say that I found The F Word, which I should note screened at Canada’s Top Ten with the alternate title If You’re Lucky, was a very funny and charming story about the challenges faced by a male and female trying to be just friends with each other.  I’ll be the first to say that I am not a fan at all of romantic comedies and I did like how this film tried to avoid falling into the clichéd trap of other romances.  The F Word wasn’t entirely successful in this regard, since even though the film tries to handle the romantic complications of Wallace and Chantry’s friendship as realistic and non-clichéd as possible, the film does become more like a standard romantic comedy in the third act.  That said, I would still prefer this film to the “dime a dozen” clichéd romantic comedies released by Hollywood. The F Word has been described as being a love letter to Toronto and, as someone who has lived in the city all his life, I am compelled to agree.  The CN Tower is clearly seen in the background throughout the film and there are scenes set in real Toronto locations, such as the George St. Diner and the Royal Cinema.  Since Toronto is often used in Hollywood films as a substitute for other cities, it is always great when my hometown gets to play itself on screen.  While other films, such as Scott Pilgrim vs. the World and Take this Waltz have already done this to varying degrees of success, I have to say that The F Word was one of the better cinematic depictions of Toronto that I have seen. As for the cast of the film, I have to say that The F Word is most definitely the film that will let Daniel Radcliffe shed his past as Harry Potter and become a romantic lead in films.  On the flip size, I have to say that Zoe Kazan was quite an adorable and quirky character and seeing her in this film makes me really want to check out her other roles (such as 2012’s Ruby Sparks).  As the obligatory best friend, Adam Driver (best known from the HBO series Girls) steals the film with many one liners (including a great statement about nachos) and a vaguely creepy relationship with his girlfriend Nicole (Mackenzie Davis). Overall, I would describe The F Word as being a romantic comedy for people that don’t really like to watch romantic comedies.  There are many moments that also delve into slapstick, while there are others that are truly touching.  Even though the the film does fall into romcom clichés in the third act, I still found this to be a very enjoyable film to watch.   8 | LIKED IT