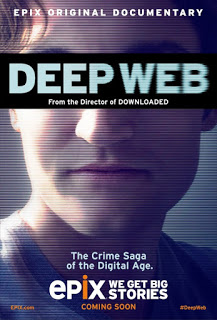 Crimes in the darkest corners of the internet are explored in Deep Web.  The deep web is a term used for all unindexed data online.  The deep web has become a hub for underground black markets, which sell everything from drugs to forged documents.  The biggest of these markets is The Silk Road, the alleged leader of which, 29 year old Ross Ulbricht, is arrested by the FBI and waiting trial.
Alex Winter (Downloaded) returns with another tech-related documentary with Deep Web, narrated by Winter’s old Bill and Ted castmate Keanu Reeves.  Despite the title, Deep Web is not entirely about the darkest corners of the internet, where a lot of nefarious action apparently takes place.  The film primarily focuses on the story of Ross Ulbricht, who was arrested under the charge of running the “darknet” marketplace The Silk Road, which was notorious for its listings of illegal drugs.
In addition to the story of Ross Ulbricht, much of the focus of Deep Web is put on Wired magazine journalist Andy Greenberg.  After original interviewing the anonymous leader of The Silk Road, going under the alias Dread Pirate Roberts (in reference to The Princess Bride), Greenberg has been following this case very closely ever since Ulbricht was named the primary suspect.  In some ways, The Silk Road website itself takes a back seat, as questions are asked by Greenberg how exactly the FBI got access to the website’s servers, which eventually lead to the arrest.
Deep Web continues the narrative found in similarly-themed documentaries, such as last year’s The Internet’s Own Boy, in how those charged with cybercrimes tend to not have the same rights as those charged with “normal” crimes.  Allegedly, the investigation of The Silk Road involved seizing computers without a warrant and allegedly hacking into the site’s servers.  In addition, Ulbricht had an “uncharged” crime of murder-for-hire on the record, which cast a shadow on his entire trial. This apparent miscarriage of justice has resulted in Ross Ulbricht’s parents to speak out in defense of their son. There is also a movement underway by “cypherpunks” to free the internet from government control.
One of the biggest things to take away from Deep Web is that the traditional methods of law enforcement cannot work in the digital age.  Even the The Silk Road ended up being shut down by the F.B.I., dozens of other black market websites surfaced in its place.  There is a very interesting quote made about this cat and mouse game, stating that “the mouse will ultimately win, but the cat will be well fed.”  No matter what crimes he truly did commit, it can most definitely be seen from this film that Ross Ulbricht was a essentially a scapegoat to give the authorities and media a face to vilify.
Those keeping track of the case of Ross Ulbricht, the trial of whom happened just a few months ago, would likely already know that this story doesn’t really have a happy resolution for him.  However, Deep Web is still an interesting look at the world in the uncharted areas of the web.
★ ★ ★ ★ | LIKED IT