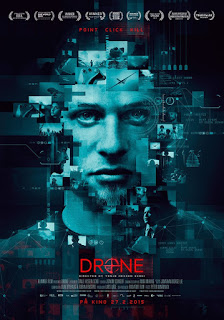 The controversy surrounding US drone strikes is explored in Drone.  Shortly after the attacks of 9/11, the CIA announced to George W. Bush that they had the capability to arm drones.  Drone strikes went on to become the defining weapon of the War on Terror, with the main selling point by politicians being that these strikes don’t endanger the lives of soldiers or innocent civilians.  However, evidence from former drone operators and the survivors of drone strikes show that this is not the case.

The goal of Drone is to show that the only thing that drone strikes are accomplishing is the dehumanization of war.  Drone operators sit in front of a blurry green screen and have to make life or death decisions based on silhouetted targets.  Essentially drone strikes are akin to playing video games, except the operators are killing real people. In fact, the military has taken advantage of this through “militainment,” where certain video games are created specifically as recruitment tools, since they are an important skill set for drone operators. Because drone strikes are a different form of killing, they essentially destroy the warrior ethos, turning drone operators from warriors into murderers.
The main subject of Drone is former operator Brandon Bryant, who now speaks out against drone strikes.  The film also looks at victims in Pakistan and the efforts of human rights lawyer Clive Stafford Smith to make the US accountable for their actions, which has indeed taken countless innocent lives. The question that ultimately has to be asked from watching this film is whether the benefits of drone strikes outweigh the downsides, since for every four targets killed by drones, ten more are created.
Drone is forecasting a scary forecast for warfare, which is straight out of a science fiction story.  As drone technology gets better, it will eventually become fully automated and future wars will be practically fought by robots.  With 87 countries currently having drone technology, it is only a matter of time before the United States’ enemies adapt drones for their own purposes.  It is also scary to think that the majority of drone strikes are done by the CIA, which allows them to get away with actions that wouldn’t be allowed under the military label.
While Drone does look at both sides of this controversy, the ultimate message of the film is that drone strikes are forever changing the state of war and probably not for the best.  This is a film to see and get frightened for the future.
8 / 10 stars

Drone opens today at the Carlton Cinema and Kingsway Theatre