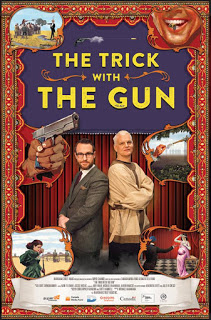 A Toronto-based magician prepares to perform the dangerous bullet catch trick in The Trick with The Gun. Scott Hammell is a young magician from Toronto, who has broken four Guinness World Records with high-risk stunts, while also being a motivational speaker for youth. Hammell is approached by Victoria-based writer Christopher Gudgeon to do a TV special with Hammell performing a bullet catch. In an offhand suggestion, Chris is asked to be the one to shoot the gun, which results in growing tensions between the two as they prepare for the trick with the gun.

The bullet catch is notorious for being one of the most dangerous of all magic tricks. The Trick with The Gun emphasizes this fact by periodically giving the history of many of the magicians who performed the trick, only to end up being killed. In fact, the inventor of the bullet catch, a French magician in the early 1600’s named Couleu, was also the trick’s first victim. It is also interesting to note that, while he was known performing his death-defining acts, the bullet catch was the one trick never to be attempted by Harry Houdini. The dark history surrounding this trick ends up adding an aura of danger to Scott Hammell’s attempt to perform the bullet catch.

It can be said that The Trick with The Gun is less about the magic trick itself and more about the relationship between Scott Hammell and Christopher Gudgeon, with the friendship between the two being seriously tested during the preparations for the bullet catch. The source of much of this tension is the fact that Chris isn’t a particularly good shot and his participation in the trick might end up being more of a liability than Hammell is willing to accept.

Trick with The Gun does end up showing the final bullet catch in its entirely, which turns out to be a somewhat tense moment of the film. While the film does reveal how other magicians have pulled off the bullet catch, including the use of wax bullets and blanks, the film doesn’t go beyond the basics of Scott Hammell’s version of the trick. However, since magic is all about amazing the audience, I wouldn’t have it any other way.

Altogether, The Trick with the Gun is a documentary that works both as a history of the bullet catch, while also dealing the stresses that come with performing such as trick. This is a film that fans of magic should enjoy.