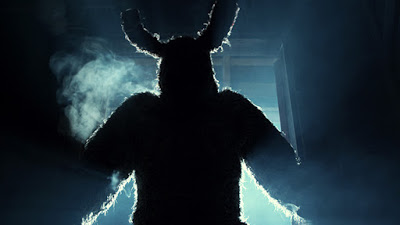 A group of friends visiting a cabin are tormented by a giant sex-crazed mutant rabbit in Bunny the Killer Thing. Jari (Roope Olenius), Mise (Jari Manninen), Jesse (Olli Saarenpää), Sara (Enni Ojutkangas), and Nina (Veera W. Vilo) travel to the cabin owned the family of Tuomas (Hiski Hämäläinen) and Emma (Katja Jaskari). Along the way, they pick up the British trio of Lucas (Marcus Massey), Tim (Orwi Imanuel Ameh), and Vincent (Vincent Tsang), whose car broke down and have questionable reasons for being in the middle of nowhere. Soon after arriving, the group is attacked by a giant half human, half rabbit, who is only interested in one thing.

Bunny the Killer Thing is a Finnish horror film that is almost guaranteed to offend many people. With the central villain being a giant mutant rabbit, who swings his large appendage around and essentially kills people by raping them, this is not a film that is going to be well-received by everyone.  Even without the killer rabbit, the plot of the film is quite misogynistic, with practically every female character being solely an object of affection for the male characters (and in one case a female, who essentially commits a lesbian rape in one scene).

Even though it’s a highly offensive film, Bunny the Killer Thing is also incredibly goofy.  The film is not really something that is to be taken all that seriously and there may even be some who end up enjoying these crazy antics, even if they end up feeling guilty about it afterwards.  I am not going to say that I liked Bunny the Killer Thing, however I am not going to say that I hated it either. To me, it is simply a film that exists and I am just going to leave it at that.