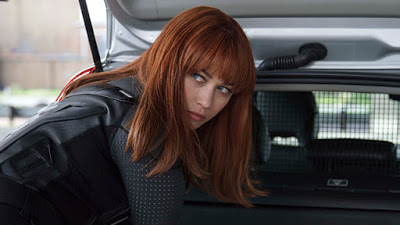 A thief goes on the run from a master assassin in Momentum. Alex Faraday (Olga Kurylenko) comes out of retirement to perform one last heist for her former partner. When her face is accidentally revealed during the robbery, Alex is forced to lay low in Cape Town. However, she becomes a target for CIA assassin Mr. Washington (James Purefoy), who is trying to recover a drive taken from the heist for a corrupt senator (Morgan Freeman). What follows is a cat and mouse game, as Alex tries to stay one step ahead of Washington.

The directorial debut by Stephen S. Campanelli, Momentum is a kick-ass female-driven action film, which comes off as somewhat reminiscent of the Bourne films. The film can almost be seen as a star-making role for Olga Kurylenko (Quantum of Solace, Oblivion), who shines in the lead role of Alex Faraday. On the flip side, James Purefoy (The Following) demonstrates his uncanny ability at playing gleefully evil characters, as the lead antagonist Mr. Washington.

While there isn’t too much in Momentum that hasn’t been seen before in other action films, it doesn’t make the film any less entertaining.  From the very futuristic opening heist to the climatic set piece in an airport, there is much wall-to-wall action in Momentum, with Kurylenko being quite capable in her lead role. The only real nitpick I have is that Morgan Freeman is practically wasted in a glorified cameo as the senator who hires Mr. Washington. The film leaves things a bit open for a possible sequel and I would have preferred if this stayed a stand-alone story. Other than that, Momentum is a fun female-driven action film.