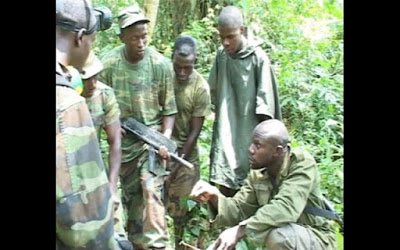 From Wakaliwood, Uganda – Home of da Best of da Best Movies – comes the country’s first action movie Who Killed Captain Alex?. With VJ Emmie providing jokey commentary of the mic, prepare for some real action as Captain Alex (Kakule William) and his team of commandos fight against Richard (Sserunya Ernest) and the Tiger Mafia. When Alex is mysteriously taken out, his kung-fu master brother (Bukenya Charles) investigates the murder, while planning revenge against the Tiger Mafia.

One of the more interesting aspects of the film is the VJ (“Video Joker”) commentary that plays throughout the film. While initially a little bit jarring, all the comments by VJ Emmie really helped to make Who Killed Captain Alex? an absolute blast to watch. In fact, you can probably start a drinking game for the number of times Emmie says “commando” throughout the film.  Altogether, Who Killed Captain Alex? is an absolute blast to watch and a testament to DIY filmmaking. I’ll definitely keep an eye out for future releases to come out of Wakaliwood.