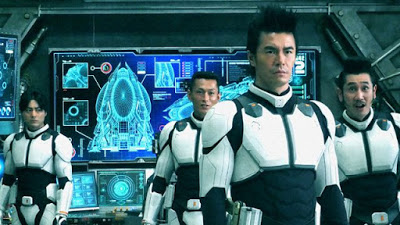 A group of desperate individuals fly to Mars to rid the planet of mutant cockroaches in Terraformars. In the year 2599, scientists have succeeded in terraforming Mars to make it fit for human emigration. However, the planet must first be rid of cockroaches, who have evolved into human-like form and are known as Terraformars. Eccentric scientist Ko Honda (Shun Oguri) recruits a crew of money-desperate lowlifes, including Shokichi Komachi (Hideaki Itô), Jim Muto (Tomohisa Yamashita), and Asuka Moriki (Rinko Kikuchi), to travel to Mars and exterminate the cockroaches. The help achieve this, Honda has genetically modified the crew to be able to transform into human/insect hybrids with unique superpowers.

Takashi Miike directs this adaptation of the manga series by Yū Sasuga and Kenichi Tachibana. The film takes place over 500 years in the future, where Earth has become extremely over-populated and humanity needs to find a new home. Thankfully, scientists have used mass quantities of moss and cockroaches to make Mars a livable planet for humans to emigrate to. The problem is that the terraforming sped up the cockroaches’ evolution cycle, turning them into human-like monstrosities. As such, it is the job of the crew of BUG-2 to exterminate the Terraformars and make Mars safe for humanity.

If you combined Starship Troopers with Power Rangers and The Fly, you would have a rough idea at the type of film Terraformars is. Each member of BUG-2 has their own unique insect superpower, which is explained through narration every time one of them transforms. While Terraformars doesn’t have the deepest plot, the film is heavy on violent action, with there being heavy casualties on both sides of this conflict. While probably not one of Takashi Miike’s best films, Terraformars is still solid popcorn entertainment.