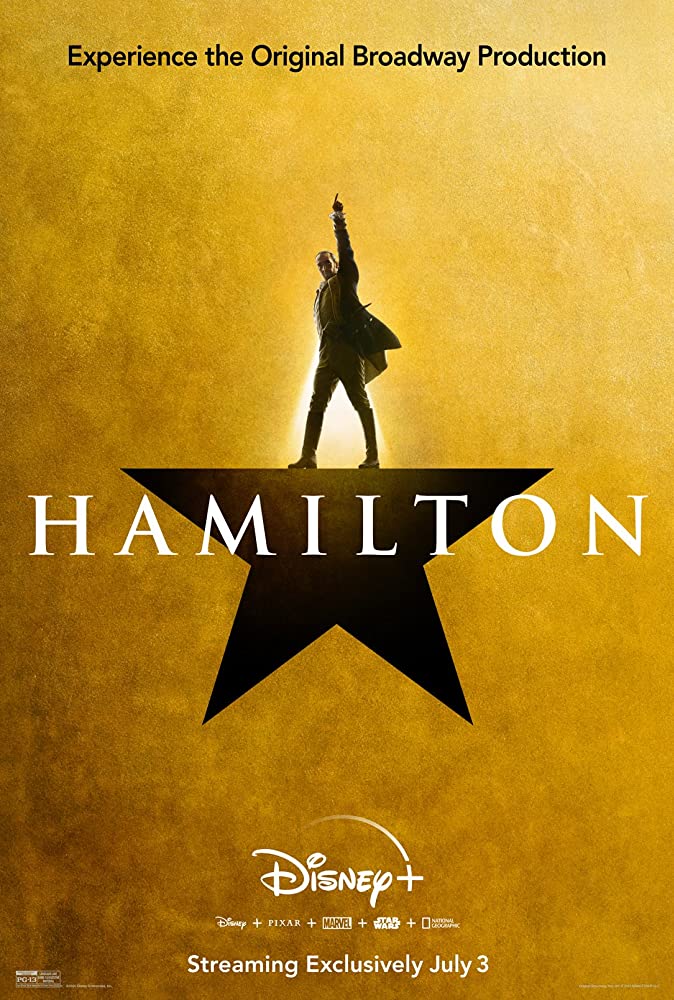 Disney presents a filmed performance of the Tony Award-winning musical with Hamilton. Inspired by the 2004 biography by Ron Chernow, the musical is a reworked story of the life of Alexander Hamilton (Lin-Manuel Miranda), who was one of the founding fathers of the United States alongside George Washington (George Washington) and Thomas Jefferson (Daveed Diggs), among others. However, it is Hamilton’s growing rivalry with Aaron Burr (Leslie Odom Jr.) that cements his place in American history.

Directed by Thomas Kail, this filmed version of Hamilton was created from three live performances at the Richard Rodgers Theatre in Midtown Manhattan in June 2016, with a number of the musical performances also shot separately without an audience, in order to get different camera angles and close-ups. The end result is a live performance of the musical, with a few added cinematic flourishes.

I don’t deny how successful a musical Hamilton has been and how it has made a career for Lin-Manuel Miranda. The musical is also quite notable for its casting of non-white actors in the central roles and having a soundtrack that is primarily made up of hip-hop and R&B. This very modernized version of American history is undoubtedly one of the things that made Hamilton so appealing.

Many who loved seeing Hamilton in the theater are sure going to flock to see this filmed version, especially since it and up close and personal performance with most of the original Broadway cast, including Lin-Manuel Miranda as Alexander Hamilton, Phillipa Soo as Eliza Hamilton, Leslie Odom Jr. as Aaron Burr, Renée Elise Goldsberry as Angelica Schuyler, Christopher Jackson as George Washington, and Daveed Diggs in the dual role of Marquis de Lafayette and Thomas Jefferson. This filmed performance also featured the return of Jonathan Groff in the role of King George III, who periodically appears in comedic interludes. However, while this presentation of Hamilton is arguably better than the theatre, I personally probably would have preferred to see the stage show over this presentation. Part of this is because of the 160 minutes running time, with a comically short one-minute intermission in-between the acts.

While I would like to someday see Hamilton on the stage, this filmed version does a fine enough job of bringing the musical to a new medium. However, I would only really recommend this to hardcore fans of the musical and those who don’t mind watching lengthy filmed theater productions.