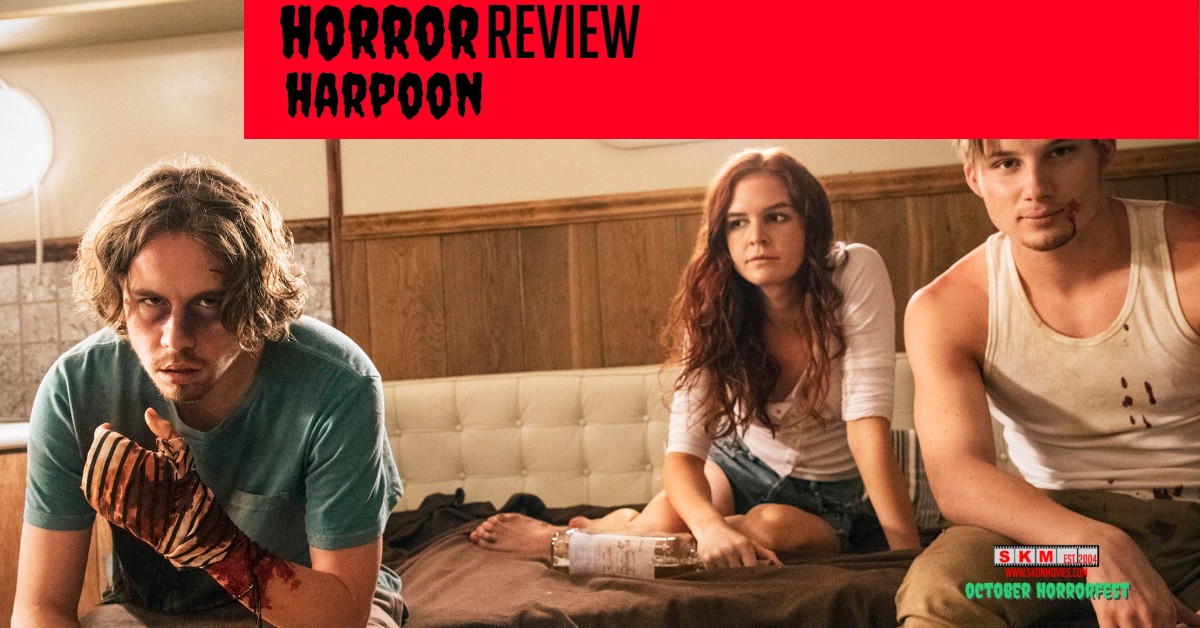 As part of our October HorrorFest, we will be posting new reviews of relatively recent horror films during the month of October

The dark secrets of three friends stranded on a yacht are exposed in Harpoon. Jonah (Munro Chambers) finds himself beaten in a jealous rage by his best friend Richard (Christopher Gray), who accuses Jonah of having an affair with his girlfriend Sasha (Emily Tyra). However, it turns out to be a misunderstanding, as Richard misread texts between Jonah and Sasha about buying Richard a new speargun for his birthday. As a way to make amends, the three go off together for a fishing trip on Richard’s yacht. However, it isn’t long before tensions between the three begin to build again, which is made worse by the fact that the yacht’s engine stops working, leaving the three stranded in the middle of the ocean.

Harpoon is a horror-comedy written and directed by Rob Grant (Fake Blood), about three friends who come at odds with each other while stranded in the middle of the ocean. With the food and water supply perilously low and Jonah suffering from a worsening injury to his hand, caused by a speargun mishap, the three have to find a way to survive this ordeal, before they end up killing each other.

One of the major plot points of Harpoon is the comparison of the three protagonists situation to a similar scenario in Edgar Allan Poe’s novel The Narrative of Arthur Gordon Pym of Nantucket and the “Richard Parker” urban legend that occurred soon after. That kind of sets the stage where Harpoon is headed, as the dark secrets of all three friends are revealed during their time stranded on this yacht, all while a narrator (Brett Gelman) gives ironic commentary on the events.

Save for a couple of reenactments of the aforementioned Edgar Allan Poe story, Harpoon is a film that is built solely around the performances of the lead actors Munro Chambers (Turbo Kid, Knuckleball), Christopher Gray (The Mist TV series), and Emily Tyra (Code Black). When the story starts off, it can be easy to assume that you have every character figured out, with Jonah being the unfairly beaten up nice guy, Richard being the rageful rich boy, and Sasha being the most level-headed of the three. However, it isn’t long until we find out that the three are much more complicated, with the film going in some surprising and bloodsoaked directions.

Altogether I have to say that Harpoon is a quite solid horror comedy that demonstrates that it is probably not the best thing to go on a boat if you have a dispute.

Harpoon is now available on blu-ray by Black Fawn Distribution