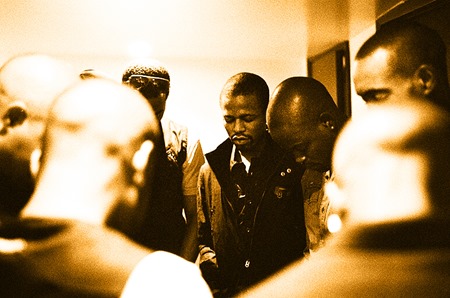 To finish finish off my Hot Docs experience for the year, I chose this this upbeat film about a group of brothers, who perform together as the Hypnotic Brass Ensemble.  All eight members of this band are the sons of anti-establishment Sun-Ra trumpeter Phil Cohran and got their starts performing as buskers on the streets of Chicago.  Brothers Hypnotic documents the band’s efforts to develop their career on their own terms, without having to sacrifice their identity to record companies. The Hypnotic Brass Ensemble are only a percentage of Phil Cohran’s large family, which includes around 15 boys and 7 girls birthed from three mothers.  They began by performing for their father and later moved on to performing on their own.  They became known by performing and selling CDs on the street, though did not like being considered “street players.”  They begin to start hitting it big when they begin performing with the likes of Mos Def and Prince, which attracts the attention of record labels.  However, the Hypnotic Brass Ensemble fear that get a recording deal will cause them to sacrifice who they are and they are left at a crossroads to decide their future. Brothers Hypnotic can be described as part history of the Hypnotic Brass Ensemble and part concert film.  The film focuses quite a bit on the band, in relation to their father Phil Cohran, who was known for running an Afro-Arts Theatre, which was known as one of the only black culture centres at the time, until a civics rights controversy caused the theatre to be closed by police (or as the sign said “closed by deceit”).  Much of the film is about the Hypnotic Brass Ensemble trying to form their own identity, while also respecting their father’s beliefs.  One of the big moments of the film comes when Phil Cohran is invited to participate in the recording of one of the band’s albums. The film also features quite a bit of performance footage from the band.  This ranges from their smaller street performances right up to accompanying Prince on stage, in front of an audience of thousands.  The Brass Hypnotic Ensemble has a very interesting sound, which typically involves combing the sounds of their brass instruments with hip-hop vocals.  I do have to say that performance numbers are probably the most enjoyable element of the film. Overall, I would say that Brothers Hypnotic was an entertaining doc about a band of brothers trying to find their own identity.  The film was definitely a fun way for me to finish off Hot Docs.8 | LIKED IT