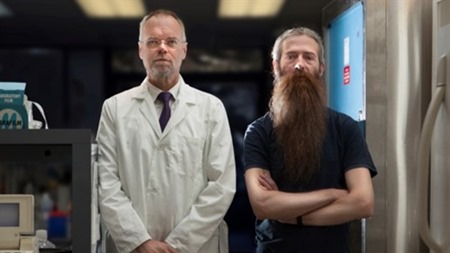 Aubrey de Grey and Bill Andrews are two scientists, who hope to find a way to cure the human aging process. Aubrey is using his company SENS to research ways to clean up the “molecular garbage” that causes aging, while Bill is using his company Sierra Science to find a way to completely reverse the aging process, using an enzyme called telomerase.  Though they have different methods, the two scientists share the common hope that aging will be cured within the next few decades. Probably the most amazing thing about The Immortalists is about how convincing these two anti-aging scientists’ theories are.  It actually seems plausible that a day will come when humanity will not have to worry about aging and the terrible ailments that comes with it.  However, the question that much be asked is whether or not we actually want to live immortal lives. Of the two, Aubrey de Grey is definitely the more eccentric of the two scientists, with his long beard and hedonistic lifestyle with his wife.  However, Aubrey is also probably the more informed on the subject of anti-aging, even criticising Bill Andrews’ telomerase method.  The film follows both scientists separately, though there is entertaining section of the film, where both are visiting an anti-aging physician and have a competition over the various tests.  All together, The Immortalists is a quite interesting look at these two scientists’ quest to end aging.8 | LIKED IT