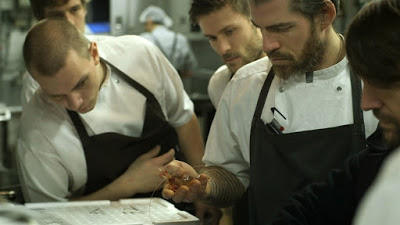 An acclaimed chef and his team rushes to open a new restaurant in Japan in Ants on a Shrimp. Celebrity chef René Redzepi has won countless awards for his Copenhagen restaurant Noma. In 2015, Redzepi temporary closes Noma and relocates his team to Tokyo to open a new five-week pop up restaurant. With less than a month to go until opening, the team sets out to make a new and unique menu featuring local delicacies.

Ants on a Shrimp is an observational film that looks into the challenges of preparing a menu for a new upscale restaurant. There is much behind-the-scenes cooking on display in the film, featuring some not-so-common ingredients, such as snapping turtles and fried fish sperm. The whole team must work together to come up with a menu that hasn’t been done before, which incorporates Japanese tastes.