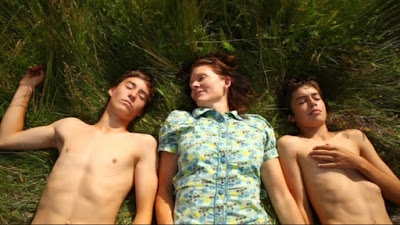 The childhood of two siblings are documented by their filmmaker mother in Brothers. Aslaug Holm has been filming the lives of her sons Marcus and Lukas since birth. Events such as Lukas’ first day at school and Marcus’ soccer aspirations are captured over the course of around eight years. As the boys progressively get older, Holm makes note of how quickly time progresses.

Brothers is a documentary that is almost certain receive comparisons to Richard Linklater’s Boyhood, even though the similar premise of both are likely just a coincidence. One of the most simple descriptions of Brothers is that it is home movies presented as a documentary, even though the film does have a quite cinematic presentation at times. One thing that develops overs time is that the boys, particularly Marcus, start getting frustrated by the fact that they are always being filmed by their mother, which results in some conflict. This results in some questioning about whether Aslaug Holm should have kept filming her sons for so long.

One theme that becomes highly prevalent in Brothers is how quickly time passes, with every year being like a breath of air passing by. The film is edited in such a way that it would periodically jump back and forward through time, contrasting the child and teenage brothers. With the film not making the passage of time too obvious, these two boys go from childhood to young adulthood in what seems like a blink of an eye. This helps to make Brothers an intriguing look at life and how short it truly is.