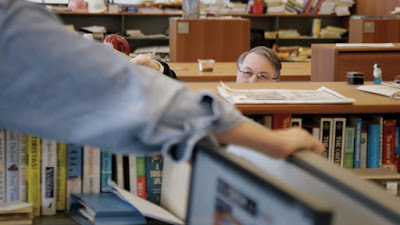 Follow a day in the life of the New York Times obituary department in Obit. It can be easy to assume that a career writing about the death of an individual can be a depressing job. However, in the obituary department of the New York Times, the focus is much more on life than death. The small and dedicated staff of the department work hard to get their pieces ready for the evening deadline, meticulously phoning the deceased’s next of kin for detail on the death and researching whatever accomplishments they had in life.

Obit spends a day in the offices of the New York Times obituary department and observes what it takes to get obituaries written in time for inclusion in the next days paper. While not every obituary written is about some huge celebrity, they do focus on people who made some sort of impact in one way or another. In recent years, obituaries have become more a celebration of an individual’s life, with the writings not being afraid to use humour from time to time.

The average person probably doesn’t put that much thought into the amount of work that goes into writing an obituary. As seen in Obit, the writers are constantly on the phone, making sure that they have all the important facts in place. If nothing else, Obit is a film worth seeing just to see to the old fashioned journalistic machine in action. With newspapers not having the same readership that they used to, journalists working in a newsroom is a dying breed and seeing these obituary writers in action is quite fascinating.