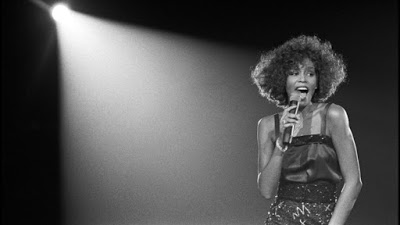 The troubled career of Whitney Houston is revisited in Whitney “Can I Be Me”. Whitney Houston was born in Newark, New Jersey as was the daughter of gospel singer Cissy Houston and cousin of Dionne Warwick. Releasing her first album in her early question, Houston quickly rose to the top of the pop charts, but was shunned by the African American community for not being “black enough.” Struggling with a lengthy drug addition and troubled marriage with singer Bobby Brown, Houston’s career begins a downward spiral in the early 2000s, which climaxes with her untimely demise in 2012.

From co-directors Nick Broomfield (Aileen: Life and Death of a Serial Killer) and Rudi Dolezal (Freddie Mercury, the Untold Story) comes this looks at the rise and fall of the career of Whitney Houston. The film is framed around unused footage Dolezal shot of Houston’s 1999 tour, which turned out to be a major turning point. At the centre of all this is the conflicted relationship between Whitney Houston, her husband Bobby Brown, and longtime friend Robyn Crawford, the latter of whom was seen as the pin that held Houston together.

In many ways, Whitney “Can I Be Me” can be considered an “unauthorized” biography of Whitney Houston, since her estate tried at the last minute to halt the film’s release. However, this just continues the narrative of Whitney Houston’s highly controlled career, in which she really wasn’t aloud to be herself. The film heavily suggests that Houston was in a lesbian relationship with Robyn Crawford, which was disapproved by her family and resulted in her marrying Bobby Brown, though Robyn remained friends with Whitney right until the 1999 tour. Ultimately, Whitney “Can I Be Me” is a tragic story of Whitney Houston’s highly controlled career and a downfall that could have easily been avoided.