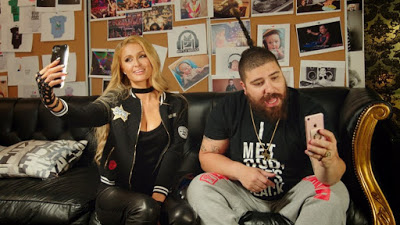 Social media celebrities are profiled in The American Meme. Since the rise of social media, there have been those who have the platform as the route cult celebrity. This include includes infamous socialite Paris Hilton, who has over 50,000,000 followers she dubs her “Little Hiltons.” Other social media celebrities include comedians Brittany Furlan and Josh “The Fat Jewish” Ostrovsky, as well photographer Kirill “Slut Whisperer” Bichutsky , infamous for his debauchery on the club scene.

Filmmaker Bert Marcus profiles the people famous for just being famous in The American Meme. These people use social media to create larger than life personas for themselves and treat their thousands of followers like their personal friends. However, there is a downside to having your life posted online, as it opens you up to increased scrutiny and an inability to return to a so-called “normal” life.

Probably the most amazing thing about The American Meme is how it shows the formerly scandal-ridden socialite Paris Hilton, as probably the most mature and well-rounded of the four main social media personalities profiled in the film. If there is anything to really take away from this film, it is that people that use social media as the road to celebrity will ultimately live sad lives. This is shown by Brittany Furlan’s difficulty finding proper acting work or Kirill Bichutsky being extremely hung over after a night of extreme partying. Andy Warhol once said that everyone gets 15 minutes of fame. The question is what happens when that time runs out.