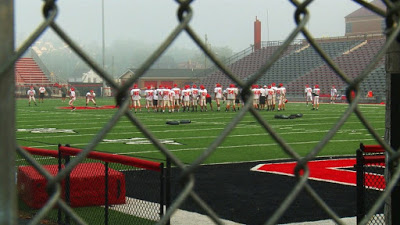 Social media plays a major role in the case of a teenager girl raped in a small town in Ohio in Roll Red Roll. Steubenville is a town in Ohio best known for the local high school football team Big Red. At a party, a teenage girl is raped by members of the team, which causes a huge outrage, especially after a local blogger posts social media posts of the boys bragging about the act. However, it seems that the adults of the town are willing to sweep the case under the rug, until it gets the attention of the mainstream public.

In Roll Red Roll, filmmaker Nancy Schwartzman takes us back to a 2013 case that shows rape culture at its absolute ugliest. It seems that the town of Steubenville is willing to put their daughters at risk for the sake of the local football team. It isn’t until crime blogger Alexandria Goddard posts social media posts from the boys that the case receives mainstream attention, as well as the intervention of the hacker group Anonymous.

Roll Red Roll is a very affecting and disturbing documentary that combines a true crime story with the overall outrage towards rape culture. Particularly sickening in the film is a leaked YouTube video of various members of the football team laughing about the rape. In fact, this is a unique case, in how social media played a major role in helping the police. However, even though there is some level of justice in the film, Roll Red Roll shows that we are still a long way off from putting an end to rape culture.