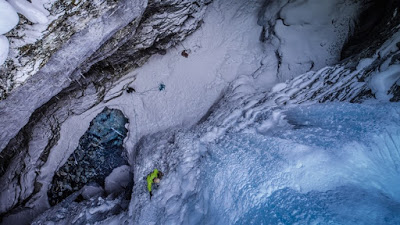 The stories of people in the mountains of British Columbia are told in This Mountain Life. 75% of made up of mountain ranges, yet few people are able to properly experience them. Martina Halik and her mother Tania are planning to embark on a 6 month, 2300km coastal traverse trip from Squamish to Alaska. They are but two of the people, who take in the natural beauty of British Columbia’s mountain ranges.

With This Mountain Life, director Grant Baldwin tries to provide a look at British Columbia’s mountain ranges that we don’t often get to see. In addition to the central story of Martina and Tania Halik’s story, This Mountain Life profiles snow artist Simon Beck, mountain climber Barry Blanchard, the nuns of the Queen of Peace monastery, and true to form mountain man in Bernhard Thor, who lives off the grid with his wife Mary.

One thing that is immediately apparent about This Mountain Life is that the film features some absolutely beautiful cinematography of the mountains of British Columbia. While there are some aspects of the film that are obviously re-enactments of the stories being told by the interviewees, there is also a lot of footage shot on location, particularly Martina and Tania’s journey, most of which was shot by a GoPro they brought with them. Overall, This Mountain Life is an absolutely breathtaking documentary.