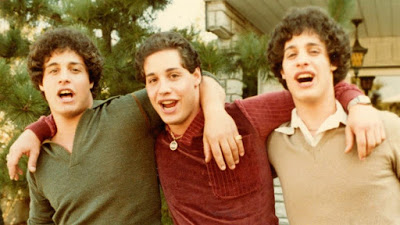 Three men discover that they are triplets separated at birth in Three Identical Strangers. In 1980, Robert Shafran, Eddy Galland, and David Kellman discovery by accident that they are triplets separated at birth and adopted by different families. Their reunion results in the three to become minor celebrities, appearing on talk shows and even a cameo in the Madonna film Desperately Seeking Susan. However, the truth soon arises about why they were separated in the first place, with the results being quite shocking.

Three Identical Strangers is an amazing story that quickly turns incredible. The story kicks off when Robert Shafran arrives at college and finds himself mistaken for Eddy, with the news attraction of that reunion attracting the attention of David. At first, these three long-lost brothers are happy to finally be together after nearly two decades apart. However, questions are soon asked about why they separated, with the answers being a major shock to all involved.