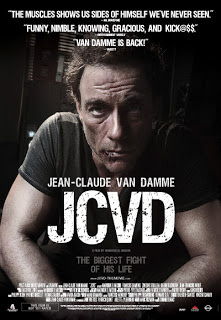 He will probably always be remembered as the “other guy” behind the killer action trio of Arnold Schwarzenegger, Sylvester Stallone, and Bruce Willis. He made an impact in Hollywood during the 80s and 90s before seemingly vanishing after 1999’s Universal Soldier: The Return.

This film sees Van Damme playing himself as he is caught up in a hostage situation at a post office and the film’s a reflection at his career as a whole and how people view him.

The best scene in the film comes towards the end as Van Damme looks at the camera and verbally reflects on his career as if he is addressing the audience. The fact that this scene (and the majority of the film) is done in his native French makes it all the more powerful.

If nothing else, this film puts Van Damme back into the public consciousness as he prepares to makes a come-back of sorts with a third Universal Soldier film that is being planned.