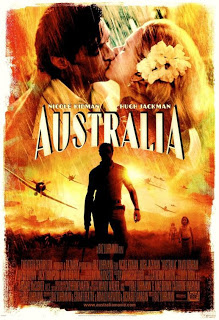 Before this film, Baz Luhrmann was known for the Red Curtain Trilogy, of which I’ve seen two: Romeo + Juliet and Moulin Rouge!

Both of those films feature extravagant ideas. One being a modern version of Shakespeare’s play, while using the original text, and the other being a period musical using modern music.

Now with his forth film, Luhrmann makes an epic film about his home country.

You could almost say the film is a bit TOO epic. You spend most of the film wrapped up in a plot about cattle driving and after that gets wrapped up with “happily ever after” sequence, the film starts another plot, for the third act, about the Japanese bombing Australia during World War II.

At a total length of 2h45m, it would leave you to think that the third act, which takes up at least an hour, wasn’t that necessary.

That little bit of nitpicking aside, I did find Australia a memorable film and it could be a good example of an “escapist” film. The film also stays true of Luhrmann’s previous formula of starting light (the film almost provides a cartoony look at Australian at the start), before moving to more serious themes later (including the afformented WWII scenes, as well as a plot involving the sending of mixed aboriginal children to missionaries in order to assimilate them into white society).

All in all, it was a good trip to the land of Oz (Wizard of Oz allusion intended).