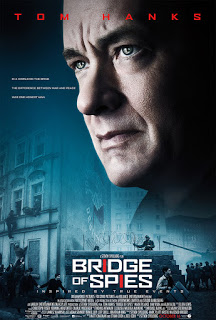 An American lawyer is recruited to defend an arrested Soviet spy in Bridge of Spies. At the height of the Cold War, a man named Rudolf Abel (Mark Rylance) is arrested on the charge of spying for the Russians. Even though it’s pretty obvious that Abel is guilty, insurance lawyer James B. Donovan (Tom Hanks) is recruited to ensure that Abel receives a fair defense. When American spy plane pilot Francis Gary Powers (Austin Stowell) is subsequently captured by the Russians, Donovan is recruited by the CIA to travel to East Berlin and negotiate a trade between the two dueling sides.

Bridge of Spies is the latest film by Steven Spielberg, based on a script by Matt Charman and the Coen Brothers. The film is based on true events from the Cold War, where lawyer Jame B Donovan is entrusted with negotiating the release of captured pilot Francis Gary Powers, in exchange for Russian spy Rudolf Abel. Donovan is portrayed as highly empathetic of Abel and fights for the captured spy to receive fair and unprejudiced treatment, even though both are hated by the general public.

The aspect of Bridge of Spies that stands out the most is the performance by British actor Mark Rylance a Rudolf Abel. Despite it being obvious right from the start of the film that Abel is indeed a Russian spy, Rylance portrays Abel as a rather unassuming Scottish-accented man, who never appears worried about the situation he finds himself in. In fact, it is Abel’s honorable persona that helps Donovan to relate to him.

Since Mark Rylance gives such a standout performance in the film, it is almost a shame that Rudolf Abel takes a backseat in the second half on the film, which focuses on James Donovan travelling to East Berlin to negotiate the trade, which becomes more complicated after American student Frederic Pryor (Will Rogers) is captured by the Berlin wall, with Donovan insisting that both Francis Powers and Prior be freed. It is during this section of the film where the writing by Joel and Ethan Coen becomes the most evident, especially as Donovan interacts with a number of somewhat unsavory individuals, all while fighting a terrible cold. The second half of the film is not as strong as the first and it is not really until Donovan has one last interaction with Abel that things go full circle.

While most of the strength of Bridge of Spies comes from the great performance by Mark Rylance, the film is altogether a decent enough addition to Steven Spielberg’s filmography.