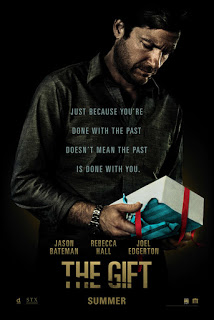 A married couple is stalked by an individual from the husband’s past in The Gift. Simon (Jason Bateman) and Robyn (Rebecca Hall) are a young married couple, who have just moved into a new house and are ready to begin starting a family. While shopping, Simon is reunited with Gordo (Joel Edgerton), an old acquaintance from high school. At first Gordo seems friendly and welcoming, but something seems off when he keeps appearing at the house when Simon’s not home and leaves various gifts on the doorstep. Determined to investigate further, Robyn learns that a secret from the past might be the reason Gordo is stalking the couple.

The Gift, not to be confused with the now fifteen year old Sam Raimi film, is the directorial debut for actor Joel Edgerton, who also co-stars in the central role of Gordo. The intentions of Gordo remains ambiguous for much of the film. Is he just a kind, yet socially awkward, former acquaintance or does he have some more sinister motives for inserting himself into this couple’s lives.

I haven’t watched any Lifetime movies, however I can probably guess that the plots of those films aren’t that far off from the plot of The Gift. The film is a rather predictable thriller and I spent much time waiting for the inevitable revelation that Gordo isn’t all that he appears to be.  The film does make a few interesting swerves, such as the suggestion that Simon isn’t completely an innocent party in this situation, however it just serves to contribute to the film’s status as a perfectly watchable, yet not all that appealing thriller.

At the very least, The Gift is going to raise some eyebrows for the casting of traditionally comic actor Jason Bateman in the lead role of Simon. As it turns out, Bateman was perfectly cast in the role, since Simon turns out to be a bit of a jerk, who only thinks for himself. In fact, he is often quite ignorant of the concerns of Robyn and he would rather that the situation with Gordo would just go away, instead of confronting the issue head on. There multiple interpretations of the title of The Gift, which includes a revelation towards the end, which might end up polarizing some audiences.

When it all comes down to it, there is nothing all that wrong with The Gift. However, this type of thriller has been done countless times before and it is not really all that appealing to see this kind of story played out again, especially since it can be seen for free in countless Lifetime movies.