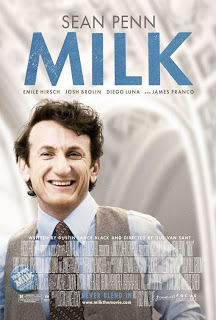 Gus Van Sant returns somewhat to the mainstream (for the first time since 2000’s Finding Forrester with this biopic about the assassinated politician Harvey Milk, who was the first openly gay man elected into public office and fought hard for gay rights in the United States.

The film is presented using both documentary and filmed footage, which gives you a good idea at the political climate during the time period. In addition, a good portion of the plot deals with an anti-gay law called Proposition 6, which seems similar to the recent Prop 9, showing how the issues in the film are still prominent today.

I found Sean Penn was good in his role and there were also memorable performances by James Franco (as Milk’s lover), Emile Herche (as one of Milk’s friends), and James Brolin (as Milk’s fellow city supervisor, who ends up assissnating Milk).

In the end, the film was a memorable (yet tragic) look at one man’s fight for gay rights in the United States.