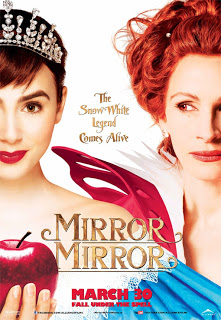 It’s been a busy week with my 30th birthday among other things, so I haven’t been able to find the time and write my thoughts on the film that I went out and saw for my birthday.

I was one of the many people who were less than impressed by the trailer for this whimsy-looking new version of the story of Snow White. It wasn’t until I heard good word of mouth about the film that I decided to give it a try.

And you know what?  I ended up quite enjoying the film.  I wasn’t quite sold at first and I thought that the first half of the film was only so-so.  It wasn’t really until the second half when I started really getting into the tongue-in-cheek humour that made the film more of a (feminist) spoof of Snow White than a straight-up adaptation.

Overall, I thought this film was a pleasant surprise.