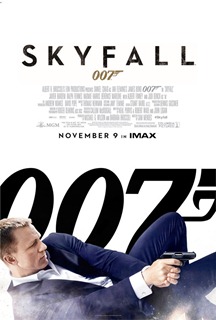 This year marks the 50th Anniversary of the James Bond franchise and with it comes the new film Skyfall.  It was a decade ago when the Bond series fell victim to excess, including invisible cars and a heavy use CGI stunts.  This resulted in the series to strip back and reboot the Bond franchise as being one more grounded in reality.  Gone were the over-the-top gadgets and in its place was more gritty action and suspense. In some ways, you can say that Skyfall is all about the Bond series having an identity crisis.  The world has started to think that Mi6 is an antiquated organization and that there is no place in the modern world for spies that hide in the shadows.  The film’s villain Silva (Javier Bardem) has a similar cynical view of Mi6, as well as a grudge against M (Judi Dench), and he uses their own tricks against them. As the Bond series turns 50, Skyfall continues the realistic feel of the previous two Daniel Craig outings, while also making us nostalgic for the Bond we grew up loving.  Many classic Bond elements are reintegrated into this film, including the return of Q, in the form of a young computer genius played by Ben Whishaw.  In fact, one of the biggest nostalgic moments in the film comes in the return of a certain car. On the realism side of thing, Skyfall benefits by the fact that it has Oscar-winning director Sam Mendes (American Beauty) at the helm.  Just like what Christopher Nolan did for the Batman franchise, Mendes made a film that is something more than merely an action film.  This is very evident in the level of character development within the film, especially concerning M. Overall, I would say that Skyfall is somewhat of a crossroads film for Bond.  It takes the realistic new Bond we’ve seen for the last six years and reintegrates him with some the of old Bond we knew and loved.  The end result is somewhere in between.  I wouldn’t go as far and call Skyfall the best Bond film ever made, but I can still say that I very much enjoyed it. 9 | REALLY LIKED IT