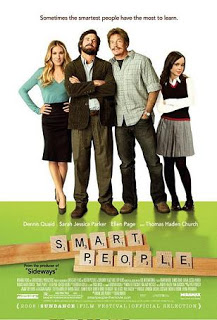 Smart People features Dennis Quaid as a college professor, who is trying to get over the recent death of his wife, while trying to manage a new relationship with a doctor (played by Sarah Jessica Parker). He also has to learn to get along with his family including his adopted brother (Thomas Haden Church) and young republican daughter (Ellen Page).

That pretty much sums up this film, which is from the producers of Sideways. However, that film was definitely much more memorable than Smart People. The story seems to just go through the motions and, even though its okay, there is nothing truly spectacular about this film.

This is also probably not the best post-Juno for Ellen Page, especially since she’s not in the film as much as is advertised (On a side note, I would like to check out some of her indie releases, such as Hard Candy and The Tracy Fragments).

In summary, Smart People is not a bad film, however it is also not a film that I would rush to rewatch.