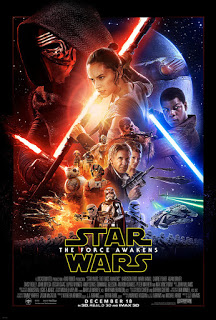 Warning: Those wanting to avoid specific plot details are best advised NOT to proceed further.

It is quite hard to fathom that we are finally getting a proper follow-up to Return of the Jedi, more than three decades after it was released. A lot of fans faith in Star Wars was seriously damaged by the 1999-2005 prequel trilogy. While I personally don’t mind that trilogy, I will agree that it was no where near par to the original 1977-1983 trilogy. With George Lucas having stepped down from creative control of the franchise, J.J. Abrams has taken the mantle for this new entry in the Star Wars saga.

I will start off by saying that The Force Awakens is probably closer stylistically to the films from the original trilogy than the entire prequel trilogy. That said, the film still isn’t quite on the same level as the original films. Without revealing too many specific plot details, The Force Awakens is pretty much Star Wars: The Next Generation, with much of the action focusing on the younger heroes of Rey and Finn, hotshot X-Wing pilot Poe Dameron (Oscar Isaac) and the new Force-wielding antagonist Kylo Ren. That said, the film also features a lot of familiar faces from the original trilogy returning, particularly the trio of Han Solo, Leia Organa, and Luke Skywalker. The inclusion of these legacy characters can be interpreted a bit as fan service, particularly since only Han Solo and Chewbacca have more than a couple scenes of screen time.

When it comes down to it, there is something really familiar about the plot of The Force Awakens, which follows many of the same beats of the films that come before. Probably the most glaring similarity is the First Order’s Starkiller Base, which is essentially a next generation Death Star. That all said, I do like the new hero’s journey that this new round of Star Wars films is developing and I look forward to seeing how the plot develops when Episode VIII is released in 2017.

I can’t finish a review of The Force Awakens without mentioning mentioning the ball-shaped droid BB-8. Essentially an R2-D2 for the next generation, BB-8 is a very cute character and practically steals every scene that it is in. The lovable nature of BB-8 is enough to make up for the fact that both R2-D2 and C-3PO only make brief appearances in this chapter of the Star Wars saga.

Altogether, I would say that The Force Awakens is a film meant to introduce Star Wars to a new generation, while also remaining faithful to what has come before. While I do not feel the film is on par with the original trilogy, it is quite better than the prequels and I liked the film for what it is.