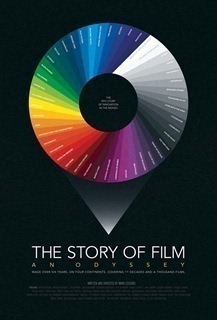 It was definitely one hell of a ride.  Over the last two months, I ventured out to watch each instalment of this epic 15 hour documentary.  It’s definitely not an easy undertaking, especially since the first episodes, from way back in late September, now seem like a distant memory, compared to the final episodes I watched last night. As such, before continuing on, it might be a good idea to revisit each of my previous summary posts:

So, The Story of Film: An Odyssey was directed and narrated by Irish film critic Mark Cousins.  The film was based on a book of the same name that Cousins wrote in 2004.  The Story of Film seems to be aiming to be the definitive cinematic documentary of the history of cinema.  While there are countless film history books and University courses, this is the first time that I can recall cinema being used to tell its own history. One thing that is immediately apparent from the start of The Story of Film is that Mark Cousins is not interested in talking about film history that we already know.  Namely, he tries his very best to avoid Hollywood films, unless it involves a development that is absolutely important to the history of film.  Instead, Cousins shows us films from many countries around the world, many of which we probably have not even been aware of.  Cousins tries his hardest to make the point that these foreign films are just as important, if not more so, as the films that come out of North America. In addition to the countless film clips, The Story of Film features footage Mark Cousins has shot, either to demonstrate filmmaking techniques or to show how historic locations look in today’s world.  The film also has interviews with a wide variety of cinematic figures, who are often introduced to the film by signing their name on a glass window. It is quite obvious that The Story of Film was made as a single 15 hour documentary and the episodic format is only there for easy viewing.  Each episode is edited in a way that it would be quite easy to join them all together as a single continuous film.  Of course, that would make for quite the marathon viewing session. If there is one real criticism that I have about The Story of Film it is that it sometimes made me feel that I was back to listening to a film history lecture in school.  This is very much a scholarly documentary and, unless you have a very passionate interest in cinema and film history, you may find yourself getting bored at times.  Also, Mark Cousin’s very thick Irish accent does make him sound a bit pretentious at times. Overall, I would say that The Story of Film: An Odyssey was an excellent look into the complete history of cinema.  Despite my film degree, I can say that I learned a few things in this documentary and even discovered a few films that I would like to see at some point.  If you are a person with a serious interest in cinema, I would highly recommend giving this a watch.10 | LOVED IT