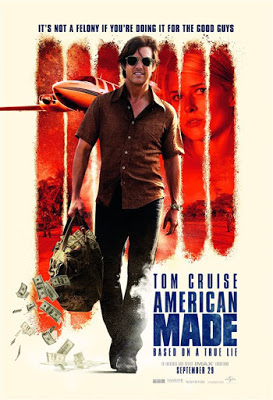 A pilot turned CIA spy becomes a drug smuggler for the Columbia cartels in American Made. Barry Seal (Tom Cruise) is a TWA pilot, who is recruited by CIA agent Schafer (Domhnall Gleeson) to fly over Central America and photograph communist insurgents. However, after being detained in Columbia, Barry is subsequently recruited by Jorge Ochoa (Alejandro Edda) and Pablo Escobar (Mauricio Mejía) to smuggle in cocaine for them. Simultaneously doing jobs for the CIA and cartels, Barry starts to earn more money than he knows what to do with.

Director Doug Liman (Edge of Tomorrow) reunites with Tom Cruise for this trueish story about Barry Seal, a pilot infamous for being a major drug smuggler for Columbia’s Medellín Cartel in the 1980s. The story opens in 1978 with Barry Seal as a pilot of TWA, with a side job of smuggling cigarettes. The latter attracts the attention of the CIA, who want Barry to take reconnaissance photos of communist activity in Central America, a job that Barry accepts without the knowledge of his wife Lucy (Sarah Wright).

It isn’t long before Barry catches the attention of the Colombian cartels, who want him to do work for them, though it results in a brief stint in jail and the relocation of Barry’s family to Mena, Arkansas. Under the pretense of delivering arms to Contras in Nicaragua, Barry continues his drug smuggling for the Colombians and amasses a large amount of wealth, which begins to attract the attention of every federal agency.

There is a lot about American Made that is comparable to Wolf of Wall Street, particularly in how its a story of a man, who raises a large amount of money through somewhat nefarious means, while also being in many ways a comedy, with the story fitting squarely in the “so insane it has to be true” category. The film is even narrated by Barry Seal through a series of video diaries that play throughout the film. However, American Made is quite different than the 2013 Martin Scorsese film, particularly since it is made as a Tom Cruise film.