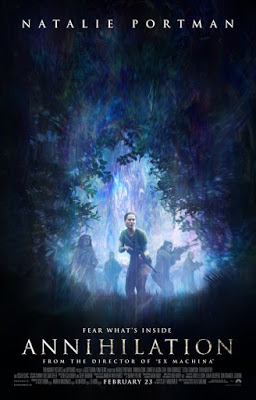 A team of scientists investigate an environmental phenomena know as “The Shimmer” in Annihilation. After being MIA for nearly a year, biologist Lena (Natalie Portman) is shocked by the sudden return of her soldier husband Kane (Oscar Isaac), who quickly falls gravely ill. Lena is taken to a government facility where psychologist Dr. Ventress (Jennifer Jason Leigh) explains that Kane was the sole survivor of a team surveying an environmental disaster zone known as “The Shimmer,” which has been steadily growing over the last three years. Desperate to know what happened to her husband, Lena joins Ventress and the team of anthropologist Anya Thorensen (Gina Rodriguez), surveyor Josie Radek (Tessa Thompson) and linguist Cass Sheppard (Tuva Novotny), as they head into The Shimmer to locate its source.

Annihilation is the sophomore directorial effort by Alex Garland (Ex Machina), based on the 2014 novel by Jeff VanderMeer. The story follows a team of five women, who investigate an environmental phenomena that has been steadily growing. It quickly becomes apparent that the plants and animals within The Shimmer are subject to crossbreeding mutations. The question that is on the mind of Dr. Ventress and her team is whether Kane’s team was a victim of these crossbred creatures or if they merely went crazy?

One thing that is quickly apparent about Annihilation is that it is a film that is hard to categorize into a single genre. Ultimately the film is a science fiction story, which progressively gets weirder and more psychedelic as it progresses. However, there are also some elements of horror within the narrative, particularly in the form of attacks by crossbred creatures, as well as a grisly found-footage video recorded by the previous team. In many ways, Annihilation is probably more comparable to Danny Boyle’s Sunshine, which was written by Alex Garland, than Garland’s excellent directorial debut Ex Machina, which probably benefited more by having a very small cast.

Structurally, the entire story of Annihilation is told in flashback as Natalie Portman’s character of Lena is being interrogated by a scientist (Benedict Wong) about what happened on the expedition. Going in with the knowledge that Lena is the sole survivor does remove some of the tension, but there is also the question of how reliable a narrator Lena is. Lena’s relationship with her husband Kane is also explored through her memories, in which it becomes quickly apparent that the marriage might have not been as happy as it was initially believed to be.

Probably the biggest take away I have from Annihilation is the film’s production design, which builds up to a very weird and psychedelic climax. I think it’s safe to assume that Annihilation is probably a film that would polarize viewers, especially those expecting a more straight-forward genre film. While I do believe Annihilation to be not as excellent as Ex Machina, I still ultimately enjoyed the film and I recommend trying to see this one on a big screen.