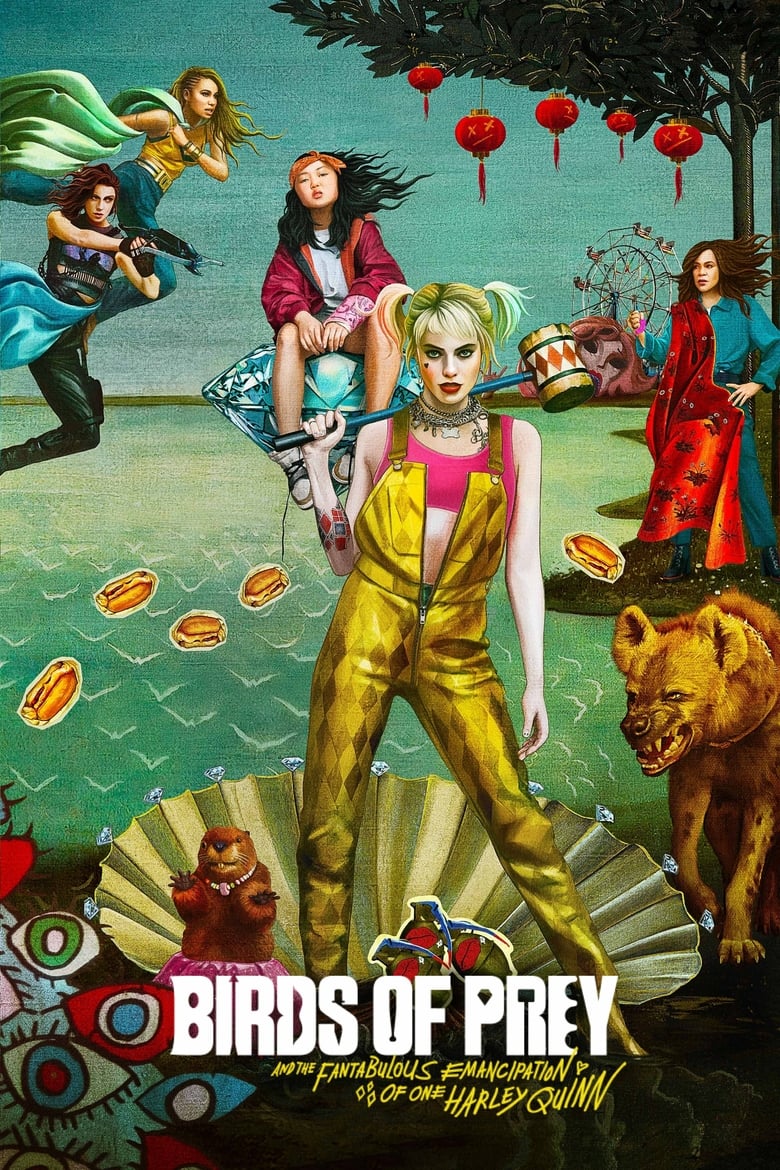 A group of female vigilantes team up against a Gotham City crimelord in Birds of Prey (and the Fantabulous Emancipation of One Harley Quinn). Despondent after breaking up with the Joker, Harley Quinn (Margot Robbie) goes on a bender before declaring her emancipating of the clown prince of crime by blowing up the Ace Chemicals plant. However, in doing so, Harley’s newfound independence makes her a target for anyone she’s ever had a grievance with, particularly local crime lord Roman Sionis, aka Black Mask (Ewan McGregor), and his psychotic henchman Victor Zsasz (Chris Messina). However, Harley buys some time when she offers to recover a valuable diamond that has been stolen by pickpocket Cassandra Cain (Ella Jay Basco). It eventually reaches the point where Harley must reluctantly team up with police detective Renee Montoya (Rosie Perez), assassin Helena Bertinelli, aka Huntress (Mary Elizabeth Winstead), and superpowered singer Dinah Lance, aka Black Canary ( Jurnee Smollett-Bell), in order to take down Roman Sionis for good.

After making her debut in 2016’s Suicide Squad, Margot Robbie’s Harley Quinn spins off into an all-female superhero team-up film, co-produced by Robbie and directed by newcomer Cathy Yan from a screenplay by Christina Hodson (Bumblebee). Birds of Prey also acts as a soft reboot for the Harley Quinn character, turning her from a full-on villain to more of an anti-hero, who develops a soft spot over the course of the film to Cassandra Cain, who has stolen a valuable diamond desperately wanted by Roman Sionis. Meanwhile, Huntress has been assassinating thugs all around Gotham and Renee Montoya has been trying to build a case against Roman, with the help of information from Black Canary, who is currently part of Sionis’ inner-circle. It isn’t long before all these women’s paths cross, as they are forced to team up if they ever expect to defeat Black Mask.

Margot Robbie’s complete dedication to her portrayal of the character Harley Quinn was one of the best elements of Suicide Squad, so it’s only natural that she would want to return to a character, this time taking a more hands-on approach as a producer. Birds of Prey definitely has some major female empowerment themes to the story, as all the central protagonists were wrong by men in one way or another and are now teaming up to take their revenge.

Just like in Suicide Squad, Margot Robbie’s performance is arguably the best thing about Birds of Prey, though the film also features some standout performances by an over-the-top Ewan McGregor as the antagonist Roman Sionis, as well Mary Elizabeth Winstead adding a bit of social anxiety to the otherwise skilled killer that is Huntress. Perhaps spurred on by the success of the Deadpool films, Birds of Prey is presented in an R-rated presentation, featuring plenty of F-bombs and some bloody violence that sometimes leans on the sadistic side, particularly Victor Zsasz’s habit of cutting off the faces of Roman Sionis’ enemies.

Birds of Prey suffers somewhat from the general mess that is the DCEU, since it may be assumed by less-informed audiences that this film has a relation to last year’s Joker, itself a stand-alone film, as opposed to the previous iteration of the character played by Jared Leto in Suicide Squad. While I will say that Birds of Prey is undoubtedly a better film than Suicide Squad, the story outside of the performances is still on the weak side, with the constant narration by Harley Quinn coming off as a poor attempt to replicate the fourth wall breaks of Deadpool. That said, Birds of Prey is still a fine superhero film that crosses the female-empowerment checkbox.