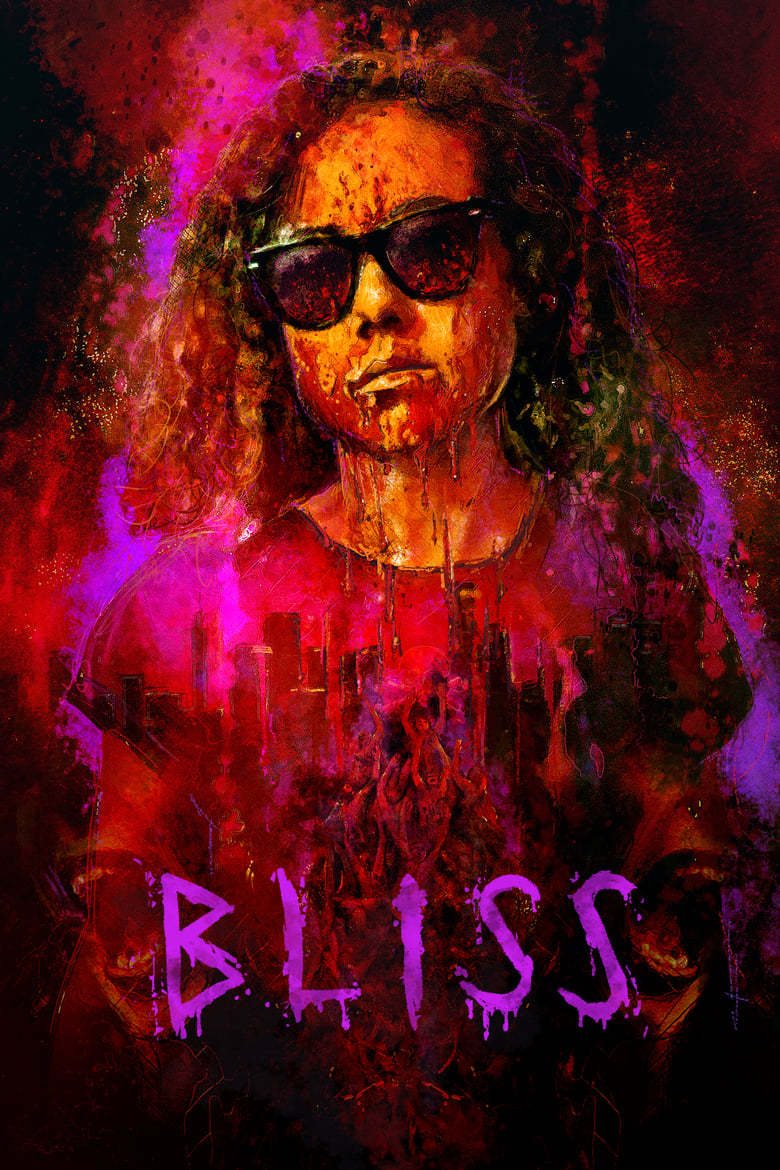 A struggling artist is introduced to a drug that gets her creative juices flowing, while also introducing some vampiric side-effects. Dezzy (Dora Madison) is a young woman, who has been struggling to finish a painting for an upcoming gallery show, while also having to deal with her nagging landlord, unreliable agent, and her freeloading boyfriend Clive (Jeremy Gardner). Desperate, three-month sober Dezzy visits her old dealer Hadrian (Graham Skipper) and acquires a new type of bliss labelled “Diablo.” After taking the bliss, and a subsequent night of debauchery with her friend Courtney (Tru Collins), Dezzy finally is able to make progress on her painting. However, she also begins to experience sudden blackouts and eventually a thirst for blood.

Bliss is the third feature film from writer-director Joe Begos (Almost Human, The Minds Eye), which reimagines the vampire film as a neon-lit punk rock drug trip. We are introduced to Dezzy as things in her life go from bad to worse, as she is dumped by her agent for not producing her painting on time and is threatened eviction by her landlord. When she begins to take the mysterious new “Diablo” drug provided to her by Hadian, described as the closest you would get to a pure uncut mix of cocaine and DMT, Dezzy is amazed to find that she has started to make progress on her painting, yet can’t remember anything that happened the night before. Soon enough, Dezzy begins developing a bloodlust, with the bliss being the only thing that is holding her bad.

If anything, I would say that Bliss would make an interesting double-bill with 2018’s Mandy, as they are both ultra-gory neon-lit horror film, with a major Satanic bent. Joe Begos has become known as a filmmaker who, almost literally, wears his influences on his sleeves and Bliss takes influence from vampire lore, while also becoming its own thing. Bliss is definitely not going to be a film for everything, whether it be the loud punk rock soundtrack or the strobe-heavy lighting that necessitated a disclaimer before the film.

The plot of Bliss is centred nearly entirely on the performance of Dora Madison (Dexter) as Dezzy, who admittedly a pretty hard character to like, with her foul mouth and bad attitude. That said, it obvious that you are meant to sympathize somewhat with Dezzy as she develops her thirst for blood, even though the moments where she gives into these compulsions are far from pleasant to watch. The cast of Bliss is rounded out by Joe Begos regulars Jeremy Gardner and Graham Skipper and there is even a brief cameo by George Wendt.

I can’t really say that Bliss is a film that I particularly liked, but it isn’t a film that I feel like completely trashing either. Perhaps it is just a film that is best enjoyed when under the influence of a copious amount of drugs while blaring punk music.