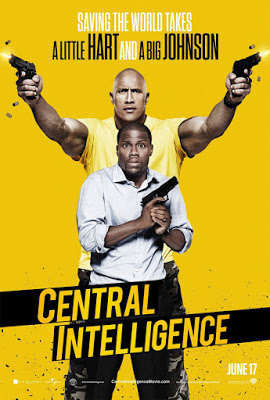 An accountant reunites with an old high school acquaintance, who turns out to be a CIA agent in Central Intelligence. In 1996, Calvin Joyner (Kevin Hart) was voted most likely to succeed at his high school. He was also the only one to show kindness to overweight and bullied kid Robbie Weirdicht (Dwayne Johnson). Twenty years later, Calvin is working a dead-end job as an accountant, when he is contacted by Robbie, who is now going under the name of Bob Stone. Calvin quickly finds out that Bob is a member of the CIA, who needs Calvin’s help in locating a terrorist. Problem is, Bob was framed for the death of his partner and a CIA task force headed by Agent Pamela Harris (Amy Ryan) is constantly on their tail.

Central Intelligence is a buddy comedy, which teams up up-and-coming comic actor Kevin Hart with Dwayne Johnson. The plot is set into motion when accountant Calvin Joyner receives a Facebook request from Bob Stone, who turns out to be his old high school acquaintance Robbie Weirdicht. Bob has always idolized Calvin, since he was one of the only people to show kindness when he was bullied in high school. As such, Bob automatically assumes that Calvin would be the perfect choice to partner up with on his quest to stop the sale of U.S. satellite codes. However, the problem is that Calvin doesn’t want to have anything to do with this action-adventure.

I should probably start off by getting one thing out of the way: Central Intelligence is a pretty dumb movie. This is established in the film’s opening scene, where Dwayne Johnson’s face is (badly) superimposed on an overweight body, while lip syncing to En Vogue in the shower. In fact, there are some very cringe-worthy moments early on in the film, whether it be the very mean bullying prank performed on Robbie or Calvin’s very obnoxious and perverted co-worker. However, things do get better as the plot gets moving and I will admit that Central Intelligence is quite funny at times.

Kevin Hart’s performance as Calvin Joyner is probably not to unlike Chris Tucker in the Rush Hour films, except instead of Jackie Chan, he is partnered up with Dwayne Johnson. In fact, much of the comedy of the film comes from Hart reacting from Johnson’s actions, with the latter playing Bob Stone as a tough guy on the outside, but a Sixteen Candles loving softie on the inside.

Central Intelligence is really a deep film and it’s actually somewhat forgettable. However, the film still makes for an entertaining and funny two hours, which is probably all that counts.