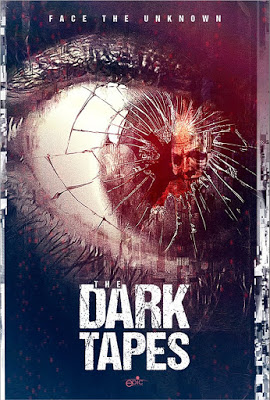 Ghosts, spirits, creatures, demons and more collide in the found footage anthology The Dark Tapes. Two people enter into a studio to find it trashed, along with a video camera, which they begin watching. In To Catch a Demon. Martin (David Rountree) and his assistant Nicole (Cortney Palm) try to capture the entities that supposedly appear while you are sleeping, with the results being filmed by Jason (Matt Magnusson). In The Hunters and the Hunted, Karen and David (Shawn Lockie and Stephen Zimpel) move into a new house and begin to experience paranormal activity, which results in them calling over paranormal investigators Cameron (Clint Keepin), Susan (Jo Galloway), and Geoff (Jonathan Biver). In Cam Girls, Caitlin (Emilia Ares Zoryan) hosts a webcam show with her girlfriend Sindy (Anna Rose Moore) and begins a private chat with lucky viewer Gerry (Aral Gribble). Finally in Amanda’s Revenge, Ryan (Jake O’Connor) becomes concerned about his longtime friend Amanda’s (Brittany Underwood) behaviour after being assaulted at a party.

The Dark Tapes is a found footage anthology film that delves into the various areas of the paranormal. The entire anthology is directed by first time filmmaker Michael McQuown, with the exception of the framing story To Catch a Demon, which is directed by Vincent J. Guastini. Each of the segments of The Dark Tapes are loosely connected with each other, sharing a thematic mythology. In a similar vein to fellow found footage anthology V/H/S, each of the segments of The Dark Tapes plays around with various film mediums, ranging from digital cameras to webcams to even 8mm film. That said, The Dark Tapes isn’t really fully dependent on the found footage premise and is actually shot in a way that you might forget that film is being presented in that style.

One of the most clever segments of The Dark Tapes is The Hunter and the Hunted, which builds up a real Paranormal Activity vibe, before proceeding to subvert expectations. Amanda’s Revenge is also a very solid segment, with it being sort of a rape revenge story with a paranormal twist. All throughout The Dark Tapes, there are actually some pretty suspenseful scenes and some well-designed practical creature effects. In fact, it can be argued that the demon from To Catch a Demon is arguably the mascot for this film, appearing in most of the promotional materials.

While The Dark Tapes does its fair share of world building, the film doesn’t beat the mythology it is trying to build over your head. However, do make sure to pay close attention, if you want to know how each of the stories connect with each other.

While the found footage genre has long since run its course, The Dark Tapes is still a solid film that uncovers the darkest corners of the paranormal.